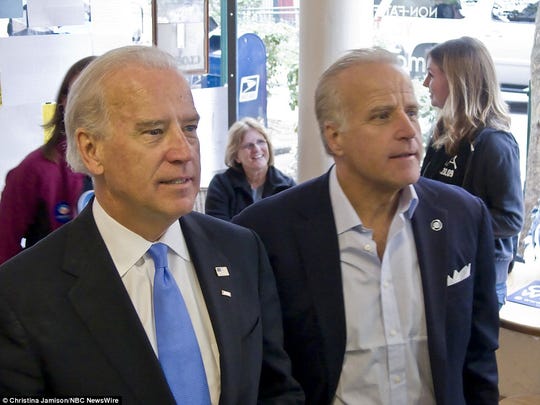 Straight from The Biden Family Playbook…

That doesn’t stop a Biden.

Breitbart has the latest…

Frank Biden, the youngest brother of former Vice President Joe Biden, saw his business interests benefit from millions of dollars in taxpayer loans to Caribbean nations during the Obama years.

The extensive overlap in Frank Biden’s dealings and Obama-Biden foreign policy in Central America is exposed in Peter Schweizer’s new book—Profiles in Corruption: Abuse of Power by America’s Progressive Elite.

Frank Biden first set his sights on the region in 2009, as the Obama administration began to repair the U.S. relationship with Costa Rica. Tensions between the two countries flared under President George W. Bush, most notably on how to deal with drug trafficking.

When President Barack Obama entered the White House, he set out to mend fences in the region in hopes of inaugurating a new era of global cooperation. Leading the charge on that front was Joe Biden, who had long standing ties to the region from his tenure leading the Senate Foreign Relations Committee.

Shortly after the new administration took office, Frank Biden began scouting real estate opportunities in Costa Rica. A lawyer by training, Frank was undeterred by his lack of background in international development and decades old legal troubles at home.

As Schweizer notes, despite the professional and personal handicaps, business opportunities were plentiful for Frank, especially after his brother paid a visit to the country.

The venture—officially sold to investors and the public as an opportunity to protect Costa Rica’s “breathtaking beauty”—amounted to little more than decimating the country’s natural wilderness to build a luxurious resort for wealthy foreigners.

“In real terms, Frank’s dream was to build in the jungles of Costa Rica thousands of homes, a world-class golf course, casinos, and an anti-aging center,” Schweizer notes. “The Costa Rican government was eager to cooperate with the vice president’s brother.”

The project, which is still in the development phase, has made Frank Biden a well connected figure in Costa Rica’s political landscape. A letter the country’s president, Luis Guillermo Solis Rivera, penned praising the project even made its way on the internet in what appears to have been a botched attempt to solicit further investors.

In total, between 2009 and the end of the Obama administration, Frank Biden’s Caribbean projects benefited from more than $54 million in U.S. taxpayer loans.

Read it all at Breitbart…

That was a joke, of course.

The Biden’s seem to have a nose for crooked business dealings and abusing taxpayers.

Get the cash however you can.