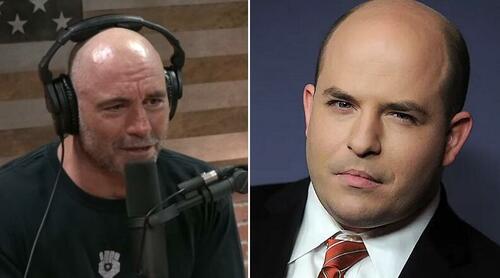 Joe Rogan pulled no punches in his latest podcast episode, where he savaged CNN and its top anchors for not reporting ‘honest’ news, and said that the network’s abysmal ratings are a reflection of a lack of trust – while more people “believe me or trust me or want to listen to me talk.”

Rogan, 54, reaches approximately 11 million listeners per episode – and there’s a reason why.

“What you should have said, “How did Joe Rogan get better so quick? How come he got COVID that’s killing everybody and he was better in five days, negative in five days, working out in six days?” How come that’s never discussed?”

Pick a side, Pfizer or the truth

Rogan asks Dr Gupta if it bothers him that CNN outright lied
…lied about meds during a pandemic pic.twitter.com/1NJWeQZ9Ry

Rogan later clarified that he doesn’t ‘hate’ CNN, but has stopped watching since he became a target.

“If you’re in business and your business is the news, and you want to get more people to pay attention, you should be honest,” he continued. “And my thoughts for CNN, my advice to them … I don’t hate CNN. I used to go to them every day for the news until they start fucking hating on me.”

He then targeted anchors Don Lemon and Brian Stelter, saying “If you want to do better, just f***ing change your model, change the way you do it. Stop this editorial perspective with guys like Brian Stelter and Don Lemon that nobody listens to. Nobody is like chiming in saying, ”Oh, yeah, finally we get the voice of reason.” Nobody thinks that,” adding “Have people that give out effective news, objective news, rather, and I’ll support you. I would turn around 100% … and I’ll be one of the people that tells people, ”I saw this on CNN, watch this on CNN.”

More via The Daily Mail:

Rogan has been on the defense for weeks now, and was forced to offer an apology after singer India Arie published to Instagram footage of Rogan using the n-word on February 3.

In total, Rogan utters the word 24 times in 23 separate clips, which were recorded before the host left his longtime platform on YouTube for his exclusive deal with Spotify in 2020.

Rogan admitted on Saturday that ‘it looks f***ing horrible. Even to me.’

Rogan added that the slurs were the ‘most regretful and shameful thing’ he has ever had to address and that he hasn´t used the N-word in years.

In the highly-edited clip, excerpts of Rogan’s language from over the years was spliced together, providing a segment that Rogan himself said made him wince.

Rogan also appeared to share an anecdote in which he compared being around black people to Planet of the Apes.

Rogan said the clips were taken out of context from 12 years of his podcast.

‘I haven’t said it in years,’ he said, in a video response on Instagram.

‘But for a long time when I would bring that word up, like if it would come up in conversation, instead of saying ‘the N-word,’ I would just say the word.

‘I thought as long as it was in context, people would understand what I was doing.’

He went on to say he realizes now that he shouldn’t use the word.

Seems like nobody who knows him has a problem with Joe…