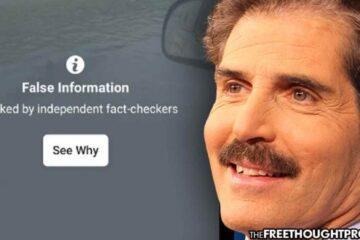 Anyone reading this article has been, or likely knows someone who has been “fact checked” or at the very least, shared something that has been “fact checked.” Out of those folks, many of them have been vindicated, and the information they shared or created, proven true or credible — only after their name tarnished, reach diminished, and information censored — like the Wuhan lab leak theory.

The Free Thought Project knows this process all too well as we have a target on our backs and we have successfully refuted and overturned nearly every fact check from the outlets who respond to our appeals. But even after the fact check is reversed, the damage is done. Even though they were all given a notification that they shared possibly false information, our users never get a notice that the ruling was overturned and our information was vindicated.

The fact checking process on Facebook is largely run by heavily partisan outlets with a clear agenda, some of whom are tied to the very industry their fact-checks protect. If you challenge the status quo — even if your content is 100% factual — there is a good chance you could end up with a label on your post and suffer the damage it entails.

John Stossel is the host and creator of Stossel TV. He is also the former host of Stossel on Reason, Fox Business’ Stossel, and ABC’s 20/20, and he has won 19 Emmys and authored several best-sellers, most recently No, They Can’t: Why Government Fails—But Individuals Succeed. In short, he is a credible journalist and author and has achieved success through hard work and due diligence. However, because he challenges the status quo, he’s recently found himself in the crosshairs of the fact checkers.

Stossel is now fighting back, and he has filed a lawsuit against Facebook and the fact checkers, seeking $2 million in damages. Like so many others, Stossel created content which questioned the official narrative of “taboo” issues like climate change. None of his information was false, but this was no defense against the fact check army.

TRENDING: Florida Fake Hate: Muslim Man Posts Video Of Daughter “Getting Bullied For Being Muslim” – It Was Really A Fight Over A Boy

According to his lawsuit, in the past year, he posted two videos on Facebook in which he “interviewed experts in the climate change arena.” Because his video was factual, the fact checkers essentially created a red herring and labelled his post based on a claim he never made, according to the lawsuit.

As Variety reports, Facebook and its fact-checking partners “falsely attributed to Stossel a claim he never made, and on that basis flagged the content as ‘misleading’ and ‘missing context,’ so that would-be viewers would be routed to the false attribution statement.” The complaint says that Stossel’s video “explored a scientific hypothesis” that “while climate change undoubtedly contributes to forest fires, it was not the primary cause of the 2020 California fires.” Per the suit, Stossel says he never made the claim that “Forest fires are caused by poor management. Not by climate change,” which was in Facebook’s fact-check.

We’ve gone through this same experience. The Free Thought Project has received “fact-check” labels on content we created that had absolutely nothing to do with the content. In one example, we shared information about deaths reported to VAERS and the entirely factual information was labelled “false’ with a link about some wild conspiracy theory attributing COVID to 5G wireless signals. We’ve never said anything about 5G yet all our followers were told they shared something false from TFTP.

Stossel experienced another common tactic as well in which the fact checkers know they can’t claim your information is false, so they label 100% factual information as “misleading.”

According to a report in Variety, on the second video, “Are We Doomed?”, Facebook added a “partly false”/“factual inaccuracies” label. That video questioned claims made by those Stossel refers to as “environmental alarmists,” including “claims that hurricanes are getting stronger, that sea level rise poses a catastrophic threat, and that humans will be unable to cope with the fallout.” Stossel claims the Facebook fact-check didn’t actually challenge any facts in the video, and he argues that the company’s fact-check process “is nothing more than a pretext… to defame users with impunity, particularly when Defendants disagree with the scientific opinions expressed in user content.”

TRENDING: Berlin in Lockstep with US — Planning ‘Center of Defense Against Disinformation’ Ahead of Elections

Just like TFTP saw its viewership and reach drastically diminish after these erroneous fact checks, Stossel saw the same.

According to the lawsuit, “Stossel was given no meaningful avenue to contest these unilateral decisions about the truth of his journalism. Meanwhile, his viewership plummeted due to both Facebook’s censorship and the reputational harm caused by the false labels.”

He’s now suing after his ad revenue tanked and Facebook and their army of “fact checkers” essentially ruined his business model.

Naturally, Facebook is standing by their heavily biased fact checkers and told Variety in a statement that they “believe this case is without merit and we will defend ourselves vigorously against the allegations.”

As we reported last week, after the heavily censored Hunter Biden laptop scandal was proven to be true, fact checking sites are certainly welcomed but when they have authority to silence those who may disagree with the majority consensus, we move from providing a benefit to silencing crucial and much needed skepticism and in this case, damning political information.

Hopefully Stossel’s lawsuit is successful and it reins in these censors disguised as fact checkers. If you’d like to help us in this fight, please consider becoming a member and joining in. You can do so here.