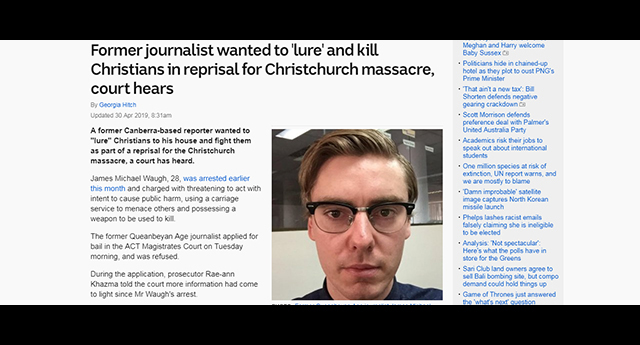 The threat of radical journo terrorism has never been higher.

A former Canberra-based reporter wanted to “lure” Christians to his house and fight them as part of a reprisal for the Christchurch massacre, a court has heard.

James Michael Waugh, 28, was arrested earlier this month and charged with threatening to act with intent to cause public harm, using a carriage service to menace others and possessing a weapon to be used to kill.

Say it with me, folks: “radical journo terrorism.”

The former Queanbeyan Age journalist applied for bail in the ACT Magistrates Court on Tuesday morning, and was refused.

During the application, prosecutor Rae-ann Khazma told the court more information had come to light since Mr Waugh’s arrest.

Ms Khazma said Mr Waugh had spoken to a doctor, while in custody, and told them of his intention of “luring in potential victims to his house” as reprisal for the massacres in Christchurch.

“He made it clear he would either engage in battle … making him a martyr or to make them look bad,” she said.

She said Mr Waugh had no mental health illness to explain his behaviour, and that he had told a doctor that he did not recognise the Australian Government and that Australian laws did not apply to him.

Sure enough, he fits the profile exactly!

According to a previous report from ABC.net.au, Waugh wrote on Facebook that he intended to behead his victims with a Middle-Eastern scimitar sword:

“I have issued threats, along with my name and address, to every coward dog church in Canberra. If you know someone with balls send them along. I’ve bought a scimitar [Middle-Eastern curved sword] and intend to cut their heads off in my front yard as a reprisal”.

The time for authorities to act is now: we need a total and complete shutdown of journo propaganda mills until we can figure out what the hell is going on!