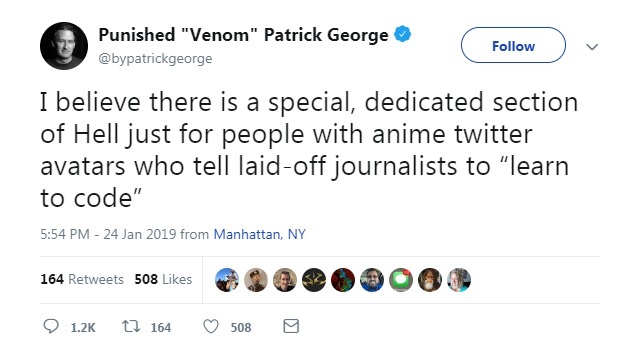 After news came out about mass layoffs at HuffPost, Buzzfeed and Gannett — in the midst of the media’s relentless smear-job against the Covington Catholic students — right-wing Twitter had a field day.

Tons of leftist journalists announced they were laid off on Twitter and the top meme was telling them to “learn to code” — which is the same advice the media gave middle Americans whose jobs are being taken in traditional industries. Talia Levin, who was hired by Media Matters last year after being fired by the New Yorker for smearing an ICE agent as a Nazi because she thought a tattoo he had looked like an iron cross, got quite triggered: Chloe Angyal, best known for penning the inflammatory “Goy Bye!” Huffington Post headline after Steve Bannon was ousted from the White House, was also laid off. Yes, she has a *literal* PhD in Romantic Comedies. The editor-in-chief of Jalopnik (which is now owned by the far-left Gizmodo Media Group) was also “trigged”: Smearing a bunch of children and trying to ruin their lives for smiling is “respectable journalism” — but making fun of journalists for losing their jobs is just a step too far!