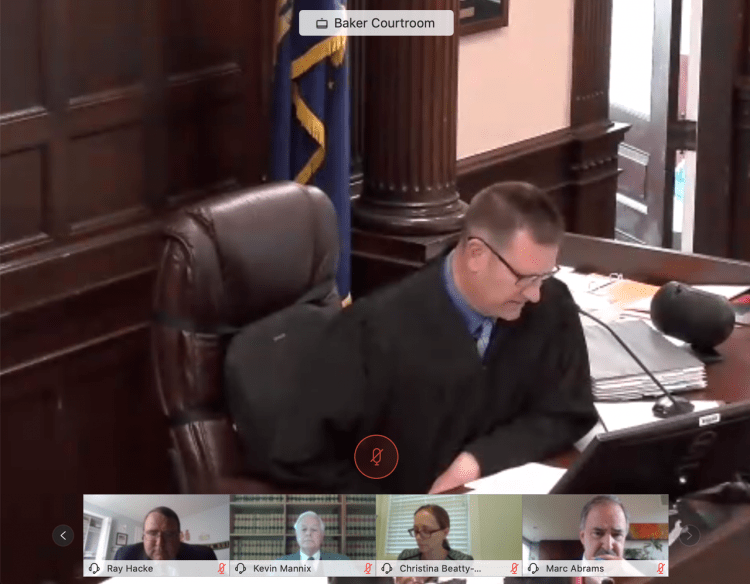 “A law repugnant to the Constitution is void, and courts, as well as other departments, are bound by that instrument.” -Marbury v. Madison

I wonder if this will open her up to a lawsuit by the likes of Lindsey Graham who was fined $14,000 for simply opening her business. In any case, a Baker County judge ruled on Monday that criminal Governor Kate Brown’s unconstitutional restrictions on religious gatherings and other lawless orders regarding locking people down were deemed “null and void.”

In a late Monday ruling, the Oregon Supreme Court stepped in to put a hold on a dramatic decision by an eastern Oregon judge that declared not only Gov. Kate Brown’s restrictions on church gatherings “null and void” but all her “Stay Home Save Lives’’ coronavirus emergency orders.

State Supreme Court Presiding Justice Thomas A. Balmer in a three-paragraph ruling issued at 7:45 pm. granted the state’s emergency motion after reviewing briefs from both sides.

The hold will remain in effect until the high court considers the state’s full petition to dismiss the Baker County Circuit judge’s preliminary injunction.

Balmer gave the plaintiffs until Friday to file any responses and said the court would take the matter under advisement, with no set timetable for a decision.

Earlier Monday, Baker County Circuit Judge Matthew B. Shirtcliff ruled that the governor’s executive orders in response to the global pandemic exceeded a 28-day limit adopted by state lawmakers and were no longer valid in response to a suit filed by 10 churches against the governor.

Of course, Brown and her cohorts will use the people’s money to fight against the judge’s ruling to uphold their lawlessness., and they have already filed an appeal with the Oregon Supreme Court.

“Following swift action by the Oregon Supreme Court, my emergency orders to protect the health and safety of Oregonians will remain in effect statewide while the court hears arguments in this lawsuit,” Brown said in a statement. ”From the beginning of this crisis, I have worked within my authority, using science and data as my guide, heeding the advice of medical experts.”

Of course, she can’t point to either the US Constitution nor the Oregon constitution to substantiate her claims, which makes her lawless.

The judge’s ruling is not without its own problems.

“The governor’s orders are not required for public safety when plaintiffs can continue to utilize social distancing and safety protocols at larger gatherings involving spiritual worship,” he ruled.

Freedom of assembly, as well as freedom of religion and the right to practice is not to be infringed by anyone for any reason. There is no authority to demand “social distancing.”

He added: “Plaintiffs have shown that they will be harmed by deprivation of the constitutional right to freely exercise their religion. Other plaintiffs have also shown great economic harm to their businesses and their ability to seek livelihood.”

Before Shirtcliff, attorneys for the churches successfully argued that ORS 433.441 limits declared public health emergencies to 14 days, or up to 28 days maximum, and because COVID-19 is a public health crisis, that limitation applied.

But the governor’s attorney countered that Brown declared a state of emergency under a different state law, ORS 401.165, which isn’t limited to any particular time period and continues indefinitely.

Yet Shirtcliff found that the governor’s other “Stay Home Save Lives” executive orders placing limits on social gatherings, education and businesses also were invalid because they exceeded a 28-day limit.

“Moreover, by not complying with ORS 433.441(5) timelines, the Governor’s subsequent Executive Orders 20—05 through 20-25 are also null and void,” the Baker County judge wrote.

Attorney Marc Abrams, representing the governor, urged Shirtcliff to put a hold on his ruling until the Supreme Court could review it, noting among other things that most states have taken actions similar to those of Brown.

“There’s evidence that this is working and the hardship balance calls at least for the court to stay its order to allow for legal review and in the interest of maintaining the status quo,” he said.

But the judge, the former Baker County district attorney who was appointed to his seat last year by Brown, denied the hold request.

Now, to be honest, no one has proven that people put others in danger by being around them. No one.

Yet, Abrams makes the claim with zero evidence to support his claim.

“But when behavior endangers others, it is not just a matter of individual choice and is, instead, a threat to public health,” he wrote.

“The Executive Orders issued by Governor Brown are not designed to hinder any specific faith, not designed to impede worship any more than any other activity that, by the mere act of gathering in large numbers, puts lives at risk. They are designed to keep Oregonians alive and to stop the spread of COVID-19,” Abrams said in court filings.

No one is put at risk from public gatherings. This is part of the beast system trying to control the people through fear, propaganda and outright force.

It’s time we slew the beast and lived as free men in this country again.