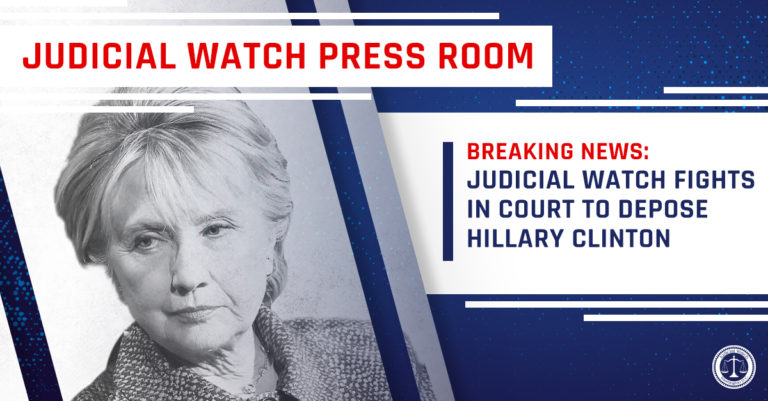 (Washington, DC) – Judicial Watch announced that a federal court will soon rule on whether Hillary Clinton and her top aide can be questioned under oath by Judicial Watch lawyers about the email and Benghazi controversies. The court has already granted additional discovery to Judicial Watch and is now considering Clinton’s objections, filed on September 23, to being questioned. Judicial Watch filed its response to Clinton on October 3 (Judicial Watch v. U.S. Department of State (No. 1:14-cv-01242)).

The court previously ordered discovery into three specific areas: whether Secretary Clinton’s use of a private email server was intended to stymie FOIA; whether the State Department’s intent to settle this case in late 2014 and early 2015 amounted to bad faith; and whether the State Department has adequately searched for records responsive to Judicial Watch’s request. The court specifically ordered Obama administration senior State Department officials, lawyers and Clinton aides to be deposed or answer written questions under oath. The court ruled that the Clinton email system was “one of the gravest modern offenses to government transparency.”

On August 22, 2019, the court then ruled that Clinton and Mills had 30 days to oppose being questioned in person under oath by Judicial Watch related to former Secretary of State Hillary Clinton’s use of a private email server. Additionally, Judicial Watch was granted seven new depositions, three interrogatories and four document requests. In granting the additional discovery, U.S. District Court Judge Royce C. Lamberth commented: “I’ll tell you everything they’ve discovered in this period raises serious questions about what the hell the State Department’s doing here.”

Judicial Watch should be permitted to directly question Secretary Clinton about her motives, thoughts, and efforts regarding the “convenience” she relies upon in justifying her use of a secret, private server and email address in direct violation of federal records laws and State Department policies.

Clinton also suggests that her emails would have been captured by State Department records systems, which is contradicted by Tasha Thian, a retired senior State records official, recently questioned by Judicial Watch:

According to Ms. Thian’s testimony, there are at least six occasions Secretary Clinton was or should have been fully informed of federal records management, including email records, and compliance responsibilities. Yet Secretary Clinton’s actual understanding of her obligations with respect to official State Department records is completely absent from the record.

Thian implied that it was inconceivable that Clinton was not aware of her obligations regarding federal records and email management:

I don’t understand why she would come up with this statements that she was allowed – or how she would save record email by emailing another employee’s account. She had resources there aplenty. So it just doesn’t make sense to me.

[Even before taking office, Secretary Clinton] knew we had a process.

Additionally, Clinton’s former Chief of Staff Huma Abedin, testifying on whether Clinton understood that FOIA applied to the clintonemail.com system, stated that Judicial Watch “would have to ask Mrs. Clinton.”

“Hillary Clinton is now joking about her emails even as she seeks to avoid being questioned on this serious scandal,” said Judicial Watch President Tom Fitton. “The court has found that this email use and cover-up are no joking matter.”

Judicial Watch’s discovery over the last several months found many more details about the scope of the Clinton email scandal and cover-up: