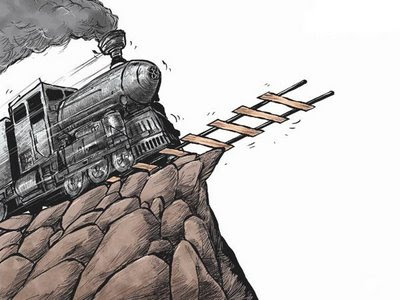 It’s too late for Speaker Pelosi and Adam Schiff; they are committed to this insanity, both staring wide-eyed down the tracks as they scream through crossing after crossing, the rails rushing underneath the engine in a dizzying blur.

Throttles full forward, it would be too humiliating to stop the train now, what with the fawning media lining the tracks cheering them on, “Faster! Faster! You can do it, IMPEACH him! Get the Bastard!”

Even though Schiff and Pelosi are destined to see their political legacies destroyed in a fiery crash, some Democrats can still be saved. All they have to do is decouple their cars and separate themselves from the frenzy. Certainly not all democrat politicians have that option, not the die-hards like Eric Swalwell who apparently provides his own fuel while GASLIGHTING the public on MSNBC. For the most part, all members of the Democrat leadership are chained to Schiff’s Loco-motive.

But what about those ten 2018 freshman Democrats looking to be reelected in districts Trump won in 2016 with a comfortable margin? Are they willing to die in the crash with their leadership? Most of the current leaders are in safe districts, as are members of the Congressional Black Caucus; they can survive the impeachment derailment, but not the others.

With independent and moderate Democrat voters watching this clown show and shaking their heads in disgust, my guess is there are at least forty or more Democrat seats in serious jeopardy. What will these politicians have to brag about to the people back home that entrusted them to work toward the good of the district and the nation?

JUMP NOW—switch parties while you can

As Newt Gingrich was leading Republicans towards an historic return to power in 1994, Republican leaders convinced conservative Democrats to abandon their party. Due to Bill and Hillary Clinton’s unpopularity, forty-three state legislators and a total of 137 Democrat officeholders said good-bye to their liberal brethren and ran as Republicans.

An Oct 1995 NYT article stated the following: “Political historians cannot recall when so many elected officials at all levels of government, from local constable to the United States Senate, have abandoned a single party in such a short time.”

Many of the newly-minted Republicans stated they felt there was no room for them in a liberal Democrat Party. Some believed the party had moved away from family values. Again from the NYT article: “Representative W. J. (Billy) Tauzin of Louisiana, who became a Republican in August, put it, “You know it is time to move when you don’t want your own leadership to come back into power.”

Today, with the super-liberal presidential candidates trying to pull the Democrat Party far left, and crazy people in leadership positions, there is every reason for Democrat politicians to jump ship. They just need a safe place to land.

NOW is the time for quiet offers to be made to vulnerable Democrats in both the House and Senate.

Use President Trump’s China strategy and tell them if they wait until the election it will be too late. We know there are at least ten new House members elected in 2018 in districts Trump won handily. How many veteran House Democrats really think their leadership has been acting in the best interest of the nation—or even the Party? It’s time to find out!

WHERE is the Republican Leadership?

MCCarthy, MCConnell, and Ronna “Romney” McDaniel (head of the RNC) are sitting on their hands at a time when they should be extending olive branches to the right people across the aisle. They should be pounding the pulpit and promising REAL legislative action on better trade deals, and infrastructure if given the majority in both Houses. Give these disenfranchised Democrats something to feel optimistic about. Perhaps the Republican leadership should read President Trump’s “Art of the Deal.”

Once they start bailing the Democrat Party will collapse within itself.

Each new day adds to the parade of fools coming before Schiff’s Foreign Affairs Committee, The panic among Democrats is palpable. Even softball interviews with Pelosi and Schiff, hosted by impeachment cheerleaders in the media, aren’t enough to put lipstick on this pig. Eventually someone will cross the aisle, then another, and another, just like in 1995.

Those other poor Democrat bastards will have to go home and face the voters, trying to explain why they accomplished absolutely nothing of merit during their term. THEN they are going to wish they had jumped off the Schiff-Pelosi Express when they had the chance.