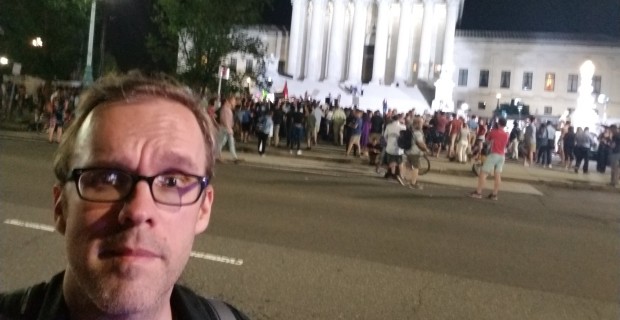 Despite hysteria, #Resistance seems to be running into protest fatigue

During an appearance on Bill Maher’s show last month, far-left film maker Michael Moore said he would “join a million other people surrounding the United States Capitol” to prevent the Supreme Court nominee from being confirmed.

That figure is looking somewhat optimistic given the turnout Monday night.

The numbers were poor given how much anger far-left groups like Media Matters, RefuseFascism and the Women’s March have been attempting to whip up since Justice Anthony Kennedy announced he would be retiring almost two weeks ago.

Indeed, the George Soros-backed groups made sure to print signs for every possible nominee, safe in the knowledge that whoever Trump picked, they’d definitely be part of the ongoing Nazi takeover of the United States.

Hilariously, the Women’s March released a statement about Trump’s nominee before they even knew who it was, forgetting to add Brett Kavanaugh’s before the text was sent out.

The relatively small crowd of people who showed up to scream helplessly at the sky did make time to verbally abuse Fox News reporter Shannon Bream, using sexist language to call her a “blonde bimbo,” because it’s totally fine and not misogyny at all when they do it.

Very few times I’ve felt threatened while out in the field. The mood here tonight is very volatile. Law enforcement appears to be closing down 1st Street in front of SCOTUS.