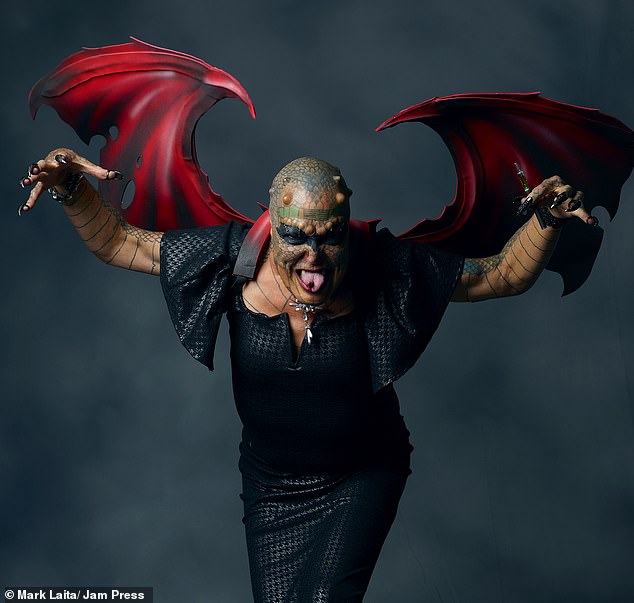 DCG’s post first appeared at Fellowship of the Minds

This is what happens when you normalize the abnormal.

From Daily Mail: A 58-year-old former banker turned ‘dragon lady’ has spent a whopping $75,000 on more than 20 body modification procedures to transform into a genderless mythical creature.

Tiamat Legion Medusa, who identifies as a transspecies reptilian, has undergone castration, ear removal, tongue splitting, and 18 horn implants over the past two decades after an AIDS diagnosis left them fearing for their life.

‘I am in the process of going genderless, so I prefer they, them pronouns,’ The Los Angeles resident explained. ‘My ultimate preference is to simply be called an ‘it,’ just like my own kind, the snakes.’

Tiamat, who was born Richard Hernandez, had a difficult childhood and developed a kinship with snakes at an early age. ‘I was abandoned by my parents in the middle of the woods, at night, deep in the heart of South Texas, where the western diamondback rattlesnake abounds,’ they recalled.

‘It was then, when my human parents shoved me out of the car to leave me there like unwanted trash, that I adopted the venomous rattler as my parents.’

Tiamat said their parents left them and two of their other three siblings close enough to the family farm so their maternal grandparents would find them. ‘My grandfather, sadly, would continue to abuse me verbally, emotionally, and physically, all because my grandfather hated my father and I was named after my father and the spitting image of him,’ they explained.

Tiamat struggled with being born a boy and came out as gay at the age of 11, which resulted in bullying and self-harm, but their dreams of being a girl were kept hidden.

After graduating high school in 1979, Tiamat escaped the small town of Bruni and moved to Houston, where they started working as an entry-level clerk JP Morgan Chase. ‘Through my 15-year tenure, I rose to become a banking vice president and client manager in the bank’s corporate banking division where I managed a diverse portfolio of corporate clients for the bank including on of the bank’s top ten clients,’ they recalled.

The former banker decided to modify their body for the first time with a pair of $400 horns in 1997 after they were diagnosed with HIV and then AIDS, which was considered a death sentence at the time.

‘Because I thought I was going to die, I started modifying my body as I felt I was in a race against time,’ explained Tiamat, who has since made a full recovery and is now classed as undetectable and untransmittable.

Tiamat is named after the Mesopotamian goddess who is the symbol of the chaos of primordial creation.
They took hormones to grow 38B breasts and also underwent prostate removal and castration – removing the testicles – while transitioning from male to female. However, they now want to be genderless.