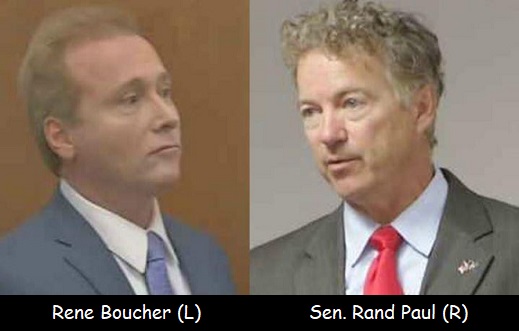 A retired anesthesiologist, Boucher is a registered Demcrat and an advocate for gun control and healthcare reform who’s been severely critical of the Republican Party on Facebook since Trump became president.

See my post, “Sen. Rand Paul was assaulted in his home by Democrat“.

Now, justice has been served.

WDRB reports, June 12, 2019, that according to court documents, Rene Boucher sold his five-bedroom home in Bowling Green so that he could pay $382,000 to Sen. Paul as part of a lawsuit verdict.

Paul had sued Boucher after the attack, which left the senator with several broken ribs and a hernia.

During the trial, Boucher said the attack was triggered by Paul stacking yard debris near his property line. Boucher pleaded guilty to assaulting a member of Congress, and served 30 days in federal prison. He was also sentenced to a year of supervised release, 100 hours of community service, a $10,000 fine, and was also ordered to pay Paul more than $600,000 for pain and suffering, and not to have any intentional contact with Paul or his family.

But Boucher has the chutzpah to sue Paul and his homeowner’s insurance company, claiming the company “refused to provide him [Boucher] a defense for the bodily injury claim (that) Paul leveled against him.”