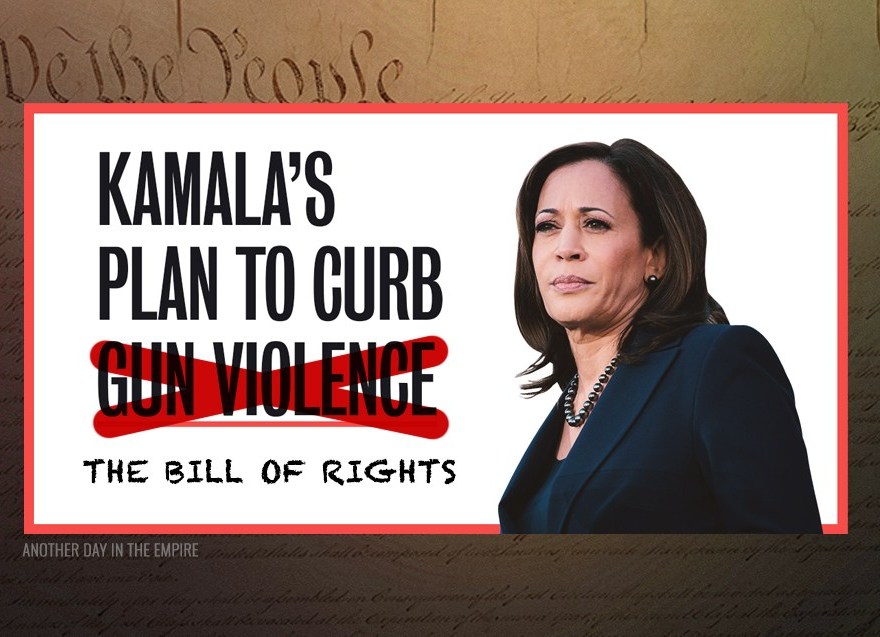 If Kamala Harris becomes the next imperial president, she will violate the Constitution and move to confiscate the firearms of her political enemies.

“Where Congress fails to act, then it is incumbent upon the executive branch of government to act… I'm prepared to act through executive action, and let us also be clear, doing nothing is not an option,” says presidential candidate Kamala Harris about her gun control plan. pic.twitter.com/mTLhKHcZb6

CNN is adding the required spin. The proposed effort to shut down the Second Amendment (and the First) is a response to “domestic terrorism,” which does not exist as portrayed in the fever dreams of Democrats. There isn’t a Great White Threat waiting to pounce on “vulnerable minorities.”

Less than two weeks after the El Paso, Texas, mass shooting and two years after violence in Charlottesville, Virginia, Sen. Kamala Harris has released a plan to take on domestic terrorism, by making it harder for suspected individuals to get guns. https://t.co/fpOaEslmmM

Notice how Charlottesville managed to appear in the above story blurb. That’s a touchstone for an identity obsessed left. The Proud Boys are very useful, they’re used to portray the right as violent lunatics. This is a very wide and indiscriminate brush. It paints everyone from the Proud Boys to conservatives, antiwar folks, and libertarians as white nationalist scum deserving an Antifa bicycle lock upside the head.

The following should read: KAMALA’S PLAN TO KILL THE BILL OF RIGHTS.

If Harris is sincerely concerned about “gun safety,” she would venture into Chicago and speech-ify against gang warfare. She would, as a former prosecutor, tell the truth about mass shootings.

Looking at the data from the Mass Shooting Tracker, widely utilized by the media, as of this writing, of the 72 mass shooters, perpetrators in shootings that killed or wounded 4 or more people, whose race is known, 21 were white, 37 were black, 8 were Latino, and 6 were members of other groups.

This quote by Colin Flaherty is likely to put him on Antifa’s hit list:

In the two-week run-up to Gilroy there were 36 other mass shootings from coast to coast—and 34 of those shooters were black. One was white and one Hispanic. These results echo a ‘New York Times’ story from 2016 that stated, much to the surprise and chagrin of the reporters, that whenever there are three or more victims of gunfire, 75 percent of shooters in America are black.

Because truth runs contrary to the identity politics theology, we never hear about any of this. CNN and the rest assure us mass shootings are genetically welded to white males, “toxic masculinity,” patriarchy, and capitalism.

Harris doesn’t address the mass violence inflicted on the citizenry by militarized police. She has not denounced the biggest mass murderer in the world—the US government and its military death machine responsible for killing millions of innocent human beings in Southeast Asia, Iraq, Libya, Syria, Afghanistan, Africa, etc.

Kamal Harris is a female Obama. She has the right ideology, gender, and skin pigmentation to be the next president. It’s not likely she will make it, however. Harris is running at 9%, well behind Warren, Sanders, and Biden.

But not to worry. The rest of the pack is as vehemently against the Bill of Rights as Harris. They understand the Second Amendment must be memory-holed, same as Hitler and Stalin understood the proles must be disarmed if totalitarian rule is to be complete.

The effort to eradicate the Second and First amendments has nothing to do with safety or opposition to white nationalism, whatever that deliberately vague term means.

It’s about control. It’s about making sure no opposition is possible and training the people to see all opposition to the state as white supremacy, conservative terrorism, and libertarian excuses for victimizing government-sanctioned minorities, most who naturally vote Democrat.