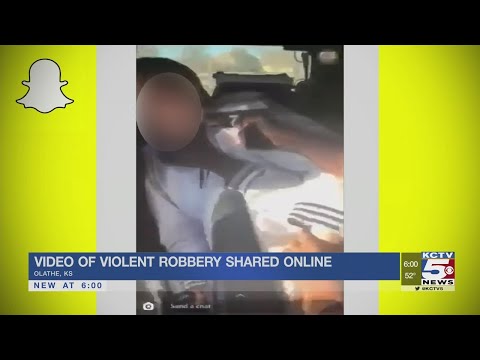 This story comes from Olathe, Kansas which is a suburb of Kansas City.

It is a perfect example of how society is collapsing.

I grew up in Kansas City and, though it has been almost 30 years since I escaped, we would have never thought of something like this happening in a place like Olathe.

Those of us stuck in the inner city were envious of people that could afford to live in Olathe.

Well 3 black thugs robbed a white kid at gunpoint and then posted the video online.

Who would have thought this could happen in Olathe?

Here’s a video from KCTV5:

OLATHE, KS (KCTV) — First robbery charges are filed after a disturbing video of an Olathe student being threatened with guns is shared on social media. That video shows four teenagers terrorizing the victim and pointing guns at him.

The young man who was abused in the disturbing video is doing alright, but just wants to get back to normalcy. According to a family member, the incident in the video happened while he was at a park.

According to police, the incident happened on Halloween around 4:30 p.m., and the suspects took clothing and electronics from the victim.

Tuesday afternoon KCTV5 News showed parents within the Olathe School District the video and they were shocked.

“It’s kind of hard to tell what’s going on there really but yes it’s pretty frightening. I can’t believe we haven’t heard anything about it,” Ryan Larue, parent, said.

KCTV5 News stopped by the Olathe School District building and the communications and media manager provided a statement regarding those in the video saying in part, “I can confirm they are currently enrolled in the district, but because this is an open case and they are minors, I am unable to provide any additional information.”

“I would think parents would be able to warn our kids about that. I mean, I haven’t heard anything about it from my son either, so I don’t know he knows about it or not but I’ll definitely be asking him,” Larue said.

Read the rest at KCTV5…

Things have changed in my hometown of Kansas City.

This is not “Dorothy’s Kansas” anymore and I’m glad I left when I did.

Again, Olathe used to be known as a semi-wealthy suburb of Kansas City and people wanted to live there.

Now is has devolved into just another place where thugs commit crimes and post their devilish deeds online.

Kansas City is hardly the thriving metropolis, complete with the daily crime sprees, that Chicago, Los Angeles or New York are.

People there are not used to seeing this, at least in Olathe.

This story is a perfect example of the downward path that America is on.

We are in free fall as a nation.