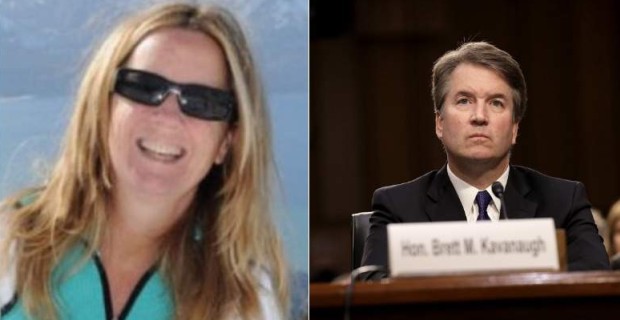 Judge Brett Kavanaugh accuser Christine Blasey Ford is an anti-Trump leftist who participated in the Women’s March and donated to the DNC, revelations that make the attempt to delay Kavanaugh’s nomination look increasingly like a desperate political ploy.

Ford, now a professor at Palo Alto University in California, accused Kavanaugh of holding her down on a bed and groping her at a house party in Maryland in the early 80’s when Kavanaugh was 17 and Ford was 15.

Ford asserts that the attack was so severe, she thought Kavanaugh was going to “inadvertently” kill her, claiming, “He was trying to attack me and remove my clothing.”

The professor says that the assault only came to a stop when a third person, Mark Judge, intervened and jumped on top of them.

However, Judge has completely denied that the incident ever took place. Democratic Sen. Dianne Feinstein of California was also first made aware of the allegations back in July but concealed all information relating to them for weeks.

It has since emerged that Ford has a history of left-wing political activism;

– She signed a letter attacking Trump’s “zero tolerance” policy at the U.S.-Mexico border, asserting that it was “violating fundamental human rights”.

– Ford attended a women’s march event and even wore a version of the infamous “pussy hat” made to look like a brain.

– Perhaps in an attempt to hide her motives, Ford scrubbed her social media presence before the allegations came to light.

Despite top Democrats calling for the vote on Kavanaugh to be postponed until Ford’s claims can be properly vetted, the FBI has refused to open an investigation.

Judiciary Committee Chairman Chuck Grassley’s (R-Iowa) office also sent out a letter on Friday morning on behalf of 65 women who knew Kavanaugh when he was in high school asserting, “For the entire time we have known Brett Kavanaugh, he has behaved honorably and treated women with respect.”

“It’s disturbing that these uncorroborated allegations from more than 35 years ago, during high school, would surface on the eve of a committee vote after Democrats sat on them since July,” a Republican spokesperson for Senate Judiciary Committee chairman Chuck Grassley said Sunday. “If Ranking Member Feinstein and other Committee Democrats took this claim seriously, they should have brought it to the full Committee’s attention much earlier.”