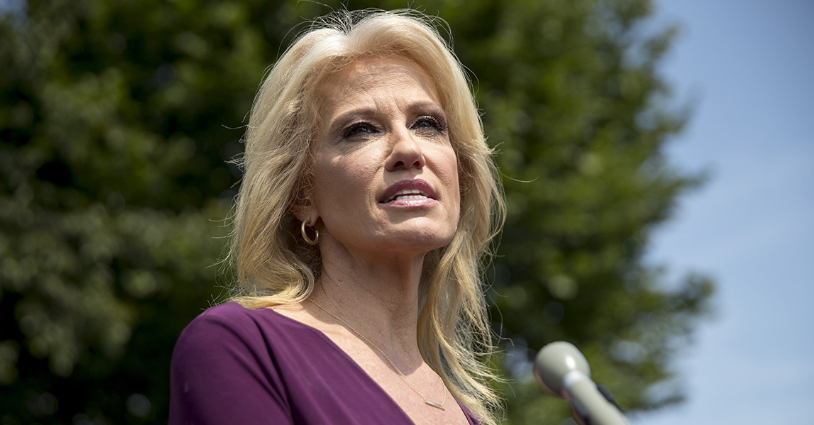 Kicking off a series of tweets about the President’s improved poll numbers.

With a 48% approval rating in a new Emerson National poll, an increase from 43% approval in October, Trump is also seeing a flip in support for impeachment with now 45% of those polled saying they oppose the effort.

“The biggest swing is among Independents, who oppose impeachment now 49% to 34%, which is a reversal from October where they supported impeachment 48% to 39%,” the poll reported.

Conway also shared the findings in the latest Morning Consult poll showing that Democrats have to work harder to attract swing voters in key states like Michigan, Pennsylvania, and Wisconsin where 7 in 10 “Obama-Trump voters” now approve of the president’s job performance.

In Wisconsin, Pennsylvania and Michigan:

Biden, Sanders and Warren all are underwater with Obama-Trump voting blochttps://t.co/d4b6jxEPpm

“Obama-Trump voters in these states mostly resemble Republicans: They largely approve of the president’s job performance, and when it comes time to cast their votes for federal office, they tend to prioritize security issues such as border security, terrorism and foreign policy,” Cameron Easley wrote for the poll, noting that although former Vice President Joe Biden is more popular with that voting block than rivals Sens. Bernie Sanders and Elizabeth Warren, he is still “underwater” with them.

Conway’s thanks to Schiff continued with another tweet citing the Politico–Morning Consult poll which was released Tuesday.

From 37% oppose impeachment last week to 47% oppose this weekhttps://t.co/MMBC1DmP9g

Opposition to the House’s ongoing impeachment inquiry from Independents climbed 10% with 47% of independents opposing the inquiry, an increase from last week’s 37% as support by independents fell 7 points to 40 percent.

And in one more shot to Schiff and impeachment-hungry Democrats, Conway cited Wednesday’s Marquette University Law School poll which found that Trump “surged ahead of all four top Democratic rivals in potential head-to-head matchups. Just 40% of Wisconsin registered voters believe Trump should be impeached and removed from office, while 53% disagreed,” according to the survey.

Support for impeachment down 4% over the last month

Trump leads top 4 Democrat candidates in Wisconsin – a state he carried in 2016 – the first time a Republican won since 1984https://t.co/BQlducz7on

The efforts by Democrats to find any means to remove Trump from office since Hillary Clinton lost the 2016 election – as well as Schiff’s latest show trial – seem to be working in the president’s favor as Americans are witnessing firsthand their corruption and desperation.