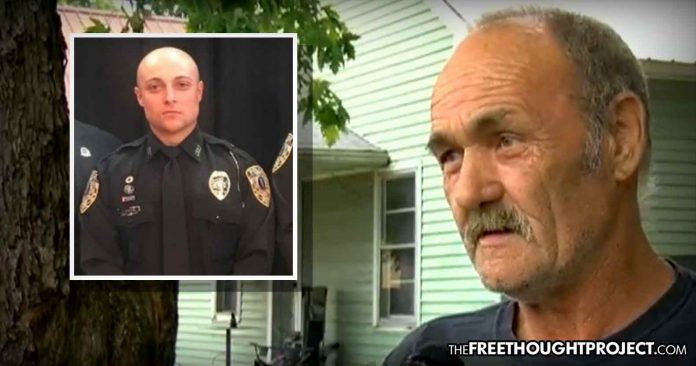 Owensboro, KY — Time and again, as the Free Thought Project has consistently reported, police officers will enter the home of an innocent person and kill them. As is the case most of the time, the officers aren’t charged despite gross negligence leading up to the innocent homeowner’s death. Or, if the homeowner does successfully defend themselves, they are often charged. In rare instances, however, homeowners defend themselves against the officers who come onto their property with no warrant or mistakenly and they are deemed justified in doing so.

David Turley, 63, was one of these homeowners who defended his home against who he thought was an intruder—but was actually a cop—and he has not been charged. What’s more, according to Turley, the cop opened fire on him and all Turley did was return fire. Luckily for Turley, officer Zachary Morris was a bad shot.

According to police, the incident happened Wednesday morning just before 6 a.m. in Turley’s neighborhood. Police say Morris was responding to a call about a “suspicious person” and when he arrived in the neighborhood, someone matching the description fled.

Police say Morris pursued the person until he lost sight of him behind some houses. That’s when Turley heard someone trying to come into his yard.

“I heard some commotion over there by the fence,” said Turley. “I saw someone standing there with a flashlight on the ground, so I walked over to see what was going on. As I got closer, POW POW! And when he did, I had my weapon by my side and I just pulled up and fired and I started toward the ground to take cover.”

Turley told WFIE News that after he heard two bullets wiz past his head, he had no other option but to return fire.

“Once they shot two times at my face, I had no choice. I was in fear of my life, and I returned fire.”

Unlike Morris, Turley did not miss and the bullet struck the officer in the lower section of his bullet proof vest and fragmenting off into his abdomen. Luckily, the officer was rushed to a nearby hospital where he underwent emergency surgery and is in good condition.

Turley said that he had no idea his bullet hit the officer until other police arrived.

After the incident, Turley was brought to the station for questioning. Instead of arresting him for shooting a police officer, however, Turley was let go without charges.

Police did confirm that Morris indeed fired his weapon. However, they have not confirmed whether or not he shot first. Indicating that he may have shot first though, is the fact that Turley was not immediately charged.

Turley explained to WFIE that he did what he did because he had no other choice but to protect his family.

“I got five grandkids in this house,” he said. “I’d lay my life down for every one of them.”

Police told WFIE that they have not determined whether or not they will charge anyone. However, since Turley is currently a free man after shooting at an officer, his chances look pretty good.

As TFTP reported last month, this is the second such instance with similar circumstances in which a homeowner shot police officers and was not arrested.

A team of police officers who were serving a search warrant at the wrong house in District Heights, MD last month encountered an armed father who was trying to protect his daughter from what he believed were intruders. He shot two officers in the process.

During a news conference on the incident, George’s County Police Chief Hank Stawinski admitted that a nine-member special operations team went to the apartment when they served a search warrant around 10:30 p.m. Then he did something incredible and praised the father and apologized.

“A law-abiding, hard-working citizen and his daughter were home at the point where we began to execute that search warrant,” Stawinski said. “The investigation corroborates his account that he did not know that there were police officers trying to enter his residence. I believe that and I know that to be true.”