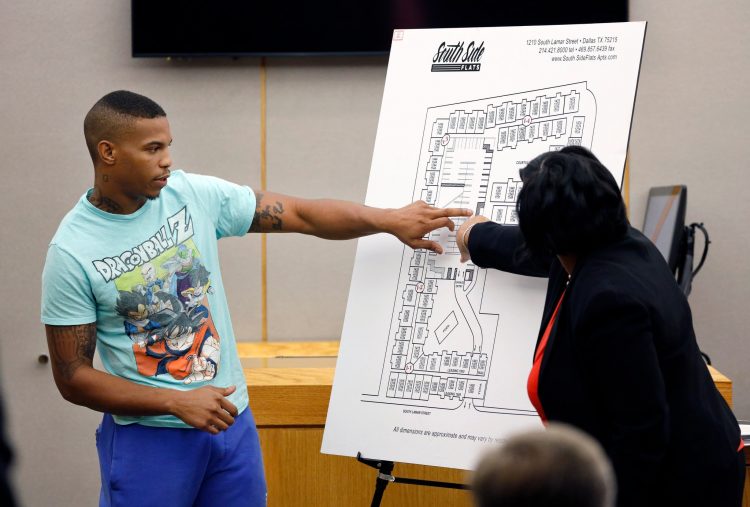 I still think there is much more in than meets the eye in the Botham Jean murder case in which former Dallas Police Officer Amber Guyger was found guilty.  On Friday, a key witness against Guyger, Jean’s neighbor, was found shot multiple times and later died at the hospital.

Consider that the Dallas police tried to smear Botham Jean after his death with a tiny piece of marijuana.  Consider that there were huge problems in their failure to fire or arrest one of their own, Amber Guyger.  Additionally, they failed to even search her apartment.

Joshua Brown, a neighbor of Botham Jean’s and Guyger at the South Side Flats apartments, was slain about 10:30 p.m. in the 4600 block of Cedar Springs Road.

Brown, 28, lived across the hall from Jean and testified about the night he was killed.

A preliminary investigation shows Brown was shot in the back and thigh, a government official said on condition of anonymity.

“The complainant was found lying on the ground in the apartment parking lot with multiple gunshot wounds,” the police said. “Dallas Fire-Rescue responded and transported the complainant to Parkland Memorial Hospital, where he died from his injuries. Several witnesses heard several gunshots and observed a silver four-door sedan leaving the parking lot at a high rate of speed.”

The Dallas News goes on to report:

On the night of Sept. 6, 2018, Brown was in the hallway on the fourth floor of the Cedars apartment building, where he and Jean lived, when he heard what he thought sounded like “two people meeting by surprise.”

He testified that he couldn’t make out what they were saying and they were speaking at the same time. And then he heard two gunshots.

Brown’s own mother was devastated at the news of the murder of her son.

I just spoke with Joshua Browns mother. She is devastated. We all are. Joshua Brown was key witness in the murder of Botham Jean that helped put Amber Guyger away. We need answers. pic.twitter.com/5BCdkVXoQ4

“He bravely came forward to testify when others wouldn’t, ” Hermus said. “If we had more people like him, we would have a better world.”

Lee Merritt, a civil rights attorney who represents the Jean family, wrote on Facebook, “Brown lived in constant fear that he could be the next victim of gun violence.  Brown deserves the same justice he sought to ensure the Jean family.”

Brown’s death “underscores the reality of the black experience in America,” Merritt said.

Mr. Merritt indicated that Brown had no known enemies and that he was not involved in any questionable activities.

“He made his money from Airbnb,” he said. “He wasn’t involved in any gangs. All the usual suspects were kind of counted out.”

According to Fox 6, “Brown had no identification on him, so police couldn’t identify him until the medical examiner made a positive ID and notified the next of kin.  There is no suspect information at this time, police said.”

This, along with the unjust sentence of just 10 years in prison for Guyger angered much of the family of Botham Jean, but his brother gave Guyger a hug and told her he forgave her.

I addressed this injustice on my radio show on Thursday.