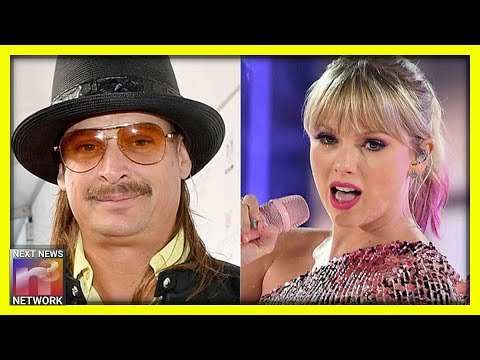 Kid Rock is one of those guys whose music is certainly the opposite of his true self. His lyrics would suggest he’s nothing more than a common thug, at least his OLDER music.

Unfortunately Taylor Swift is also one who can’t be judged by her music, at least her OLDER music.

This woman is not at all who she appears to be, and that’s too bad — because my daughters once idolized her.

Now they won’t listen to her music at all. Their choice. Not mine.

Inside the former fashion magazine, Swift has the opportunity to prove how passionate she is about defending and protecting the gay community, even though Swift says she isn’t gay. Vogue talks about her new music video, “You Need To Calm Down,” that includes a cast of mostly gay characters, including, “Lesbian Jesus,” and Dexter Mayfield, the plus-size male model and self-described “big boy in heels.”

Wow! She’s so accepting and tolerant.

Vogue writer Abby Aguirre explains how Swift is going all-in to convince her mostly teenage fans to vote for Democrats in 2020.

Swift, who has been criticized for keeping her politics to herself, first took an explicit stance a month before the 2018 midterms. On Instagram, she endorsed Democrats for the Tennessee Legislature and called out the Republican running for Senate, Marsha Blackburn. “She believes businesses have a right to refuse service to gay couples,” Swift wrote. “She also believes they should not have the right to marry. These are not MY Tennessee values.”

Swift says the post was partly to help young fans understand that if they wanted to vote, they had to register. To tell them, as she puts it, “Hey, just so you know, you can’t just roll up.” Some 65,000 new voters registered in the first 24 hours after her post, according to Vote.org.

Taylor’s interview wouldn’t be complete without trashing President Trump, the most pro-gay president in the history of the United States. Despite trashing Trump and Republicans who support him, Swift whines about being criticized by Kim Kardashian, and the nickname, “snake,” that Kim gave her, as a result of a feud Taylor had with her husband, Kanye West. West, has been ridiculed by almost every member of Hollywood for daring to support President Trump openly.

“Unfortunately in the 2016 election you had a political opponent who was weaponizing the idea of the celebrity endorsement. He was going around saying, I’m a man of the people. I’m for you. I care about you. I just knew I wasn’t going to help. Also, you know, the summer before that election, all people were saying was She’s calculated. She’s manipulative. She’s not what she seems. She’s a snake. She’s a liar. These are the same exact insults people were hurling at Hillary. Would I be an endorsement or would I be a liability? Look, snakes of a feather flock together. Look, the two lying women. The two nasty women. Literally millions of people were telling me to disappear. So I disappeared. In many senses.”

Finally, the former fashion magazine helps Swift to promote her upcoming acting debut, as a star in the film adaptation of Andrew Lloyd Webber’s “Cats,” as Bombalurina, the flirtatious red cat.

Today, Kid Rock, an outspoken conservative, and Trump-supporting mega-star responded to Taylor Swift’s efforts to push her fans into voting for far-left politicians.

In his tweet, Kid Rock explains why Taylor Swift “wants to be a democrat,” saying she will “suck the door knob off Hollyweird to get there.” Kid Rock called it the “Oldest move in the book,” and wished Swift, “Good luck.”

Taylor Swift wants to be a democrat because she wants to be in movies….period. And it looks like she will suck the door knob off Hollyweird to get there. Oldest move in the book. Good luck girl.

Sickening and totally fake are the words that come to mind.

Taylor Swift has gone to the dark side, and the funny thing is that she doesn’t seem to be helping the party:

That’s what happens when people spot a celebrity trying to push bad politics on them. Remember Lebron?

That LeBron James article was titled poorly, but basically his fans in Cleveland stopped being fans when it came to his politics — near empty arena!

This is what happens when Pop Culture icons try to start telling us how to vote.

And, again… back to Swift.

Do you really think people in Tennessee are largely in favor of Transgender Rights?

They are probably trying to hide their kids from the Drag Queens.

That is conservative country.

They probably wish they could disown this woman, or that she would just go away.