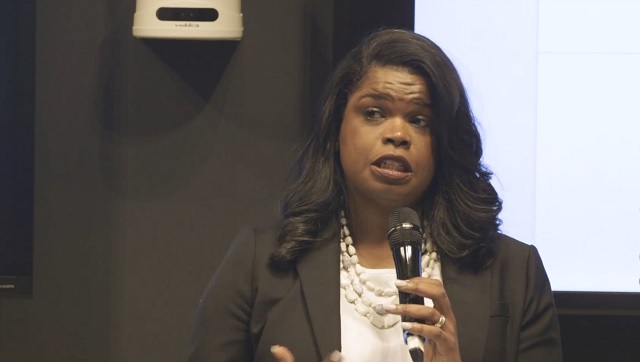 You just can’t make this stuff up!

Cook County (Ill.) State’s Attorney Kim Foxx did not “formally” recuse herself from the Jussie Smollett case, her office said in a statement Thursday, explaining that Foxx used the term “recuse” in a “colloquial” sense rather than a legal sense when she left the case in February.

The statement was the latest twist in the saga centering around Smollett, the “Empire” actor whom Foxx’s office decided not to prosecute Tuesday in a stunning reversal after Smollett faced a 16-count indictment for allegedly staging an assault against himself in January.

Foxx announced Feb. 19 that she was leaving the case, clarifying later that her decision stemmed from her contact with a relative of Smollett. But Thursday’s statement said Foxx’s decision was not based “on any actual conflict of interest,” implying that Foxx was concerned about the appearance of a conflict.

“Instead, in an abundance of caution, she informally separated herself from the decision-making over the case and left it to her First Assistant State’s Attorney Joe Magats, a 29-year veteran prosecutor,” the statement added. “Although we used the term ‘recuse’ as it relates to State’s Attorney Foxx’s involvement in this matter, it was a colloquial use of the term rather than in its legal sense.”

This was a monumental fraud pulled on the public.

Fox News reported Wednesday that Foxx’s office sent out an internal email asking “‘assistant state’s attorneys to dig for any examples to bolster Foxx’s claim that the dropped charges in the Jussie Smollett case weren’t as uncommon or shocking as they seemed.”

Within 48 hours of Cook County dropping the charges against Smollett:

Source inside CPD relays that it is absolutely NOT NORMAL to have an alternative prosecution where the defendant doesn't admit guilt. (Jussie Smollett actually gave a victory presser proclaiming innocence.)

The spin Kim Foxx’s office is trying to put out is that it’s entirely “consistent” for alternative prosecutions to conclude in such a way. @CWBChicago dug through records of those in Cook County w/cases comparable to Smollett. His deal is not normal. https://t.co/z56t9z8Phn

I’m sure Joe Biden loves seeing our “English jurisprudential culture” scrapped like this!