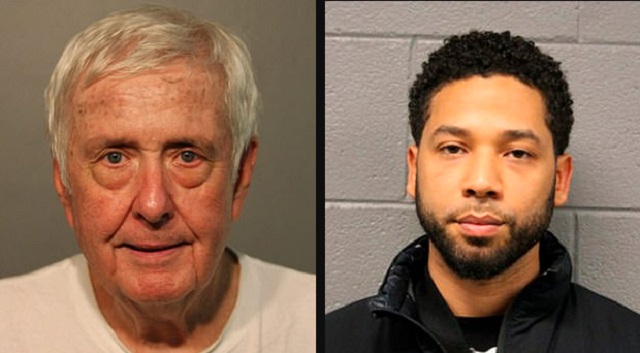 This is Kim Foxx country!

From The Daily Mail, “Frail Chicago businessman, 76, charged with the SAME crime as Jussie Smollett was fined and now has a criminal record, while the disgraced actor who cost the city $130,000 by refusing to admit culpability had all charges dropped”:

A frail businessman was arrested and charged with the same crime as Jussie Smollett, and admitted his crimes straight away to save Chicago police an investigation, but now has a criminal record.

Robert Racky pleaded guilty to filing false police report last month, after calling the cops in August 2018 saying he been carjacked. In fact, he had been booted by the city for unpaid parking tickets.

The frail 76-year-old, who opened the first rooftop club outside the home of the Chicago Cubs in Wrigleyville in 1988, was thrown in jail for two days before a lawyer posted his bond.

He couldn’t afford to pay the bail himself because of a slew of financial problems and was suffering from crippling bronchitis at the time.

Racky admitted his crimes straight after he was arrested and saved the city a lengthy investigation, but was still dragged through the courts and will now likely end his life with a rap sheet.

It was his first offense. Now questions are being raised as to why Racky was subjected to different standards to Smollett.

This one is a real mystery!

Just a few weeks before Racky’s guilty plea, Cook County State’s Attorney Kim Foxx dropped all charges against the Empire star after he allegedly staged a hate attack to try and get a raise on the show.

[…] Smollett has never apologized for his actions, has never been held accountable, and the investigation into his conduct cost Chicago police $130,000. He did two days of community service.

[…] Ever since, Foxx’s office has defended their decision to drop the charges against Smollett and insist they only focus on ‘violent crime’. She has also suggested race may be a factor in the criticism against her.

Foxx even said that Smollett’s deal is available to all defendants.

There was no violence involved in Racky’s arrest or conviction.

Incidentally, though Kim Foxx chose to prosecute Racky for filing a false police report about a carjacking which never happened, Foxx chose not to prosecute two teen suspects who were accused of taking part in a very real carjacking against a 71-year-old retired Chicago Police officer (a third suspect, pictured below, was shot and killed in the act). It looks like letting off Smollett and these accused carjackers was “fighting systemic racism” while throwing the book at Racky is what they call “correcting historical injustices.”