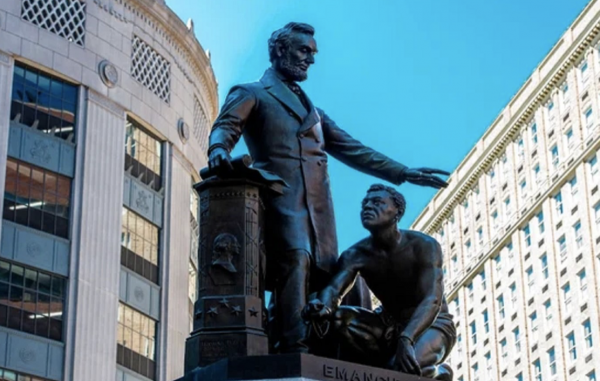 White guy who freed the slaves isn’t free from the woke wave overtaking America…[Boston Removes Statue of Lincoln That Celebrated Emancipating Slaves — Because He Was White, The Gateway Pundit, December 29, 2020]:

Boston has removed a statue of Abraham Lincoln that celebrated the emancipation of slaves — simply because he was white.

The statue, called The Emancipation Memorial, featured a freed slave kneeling before Lincoln. It is a copy of the statue in Washington, DC, which Frederick Douglass spoke at the dedication of in 1876.

The bronze statue features an inscription that reads, “a race set free and the country at peace. Lincoln rests from his labors.”

The Boston Arts Commission voted to remove the statue in July, because people are offended that a black man would kneel before a white man. It was removed on Tuesday morning.

“After engaging in a public process, it’s clear that residents and visitors to Boston have been uncomfortable with this statue, and its reductive representation of the Black man’s role in the abolitionist movement,” Boston Mayor Marty Walsh (D) said in the statement at the time.

Democrats have been attempting to have the statue in DC removed as well.

The Founding Fathers came next.

Abe Lincoln and other white men are now falling.

Our job was never to reform this system, but to survive its unraveling.