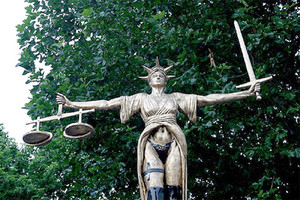 How long can honest Americans afford to stay honest?

Our nation is awash with third-world migrants who refuse to assimilate or honor our flag or our traditions. They break our laws and aren’t even deported. Now dozens of states and cities actually provide them with sanctuary status. Most off these illegals don’t carry car insurance, so when they run into you…and they will, it’s all on your dime to get your ride repaired. Don’t expect the nice police officer to expend any energy helping you locate the deadbeat after they run away.

We see corruption at the highest levels of state and national government, and a two-tiered justice system that serves to shield the privileged, and that includes anyone who has managed to weasel into a special protected status.The higher the felon has risen in society or government, the more damage they do and the less likely they will be to face consequences.

During the recent impeachment debacle we witnessed so-called officers of there courty tell lie after lie and never blink.

Civil and criminal Judges make rulings based on their personal and political biases, while prosecutors pick and choose who they will drag before the court. If a prosecutor withholds exculpatory evidence from a defendant (and they do so often) there are no repercussions.

Police go around bragging about how often they get away with domestic battery, DUIs and reckless driving, and then relish using their authority to harass citizens who dare to stand up for their rights. A favorite cop saying is “Don’t screw with people who screw with people for a living.”

Over 300 thousand government employees and retirees owe over $3 Billion dollars in back taxes without even fearing their wages or retirement checks being garnished. We pay our taxes because we don’t have a choice.

Anti-American punks like ANTIFA run in packs physically and brutally assaulting people of different political beliefs, meanwhile the cops stand by and watch. When the Proud Boys formed to fight back against ANTIFA, they were arrested and prosecuted and their group deemed a domestic terrorist organization.

Politicians in states like Virginia, New Jersey and California turn honest citizens into criminals overnight with draconian gun laws they don’t even follow.

Are we fools for following the same laws everyone else seems to ignore, including the people who wrote and voted on them? Are we setting our children up to be patsies by teaching them social ethics and morality?

How long can we hold out hoping the nation will return to civility and morality, and at what point do we start playing by their rules—the nation be damned