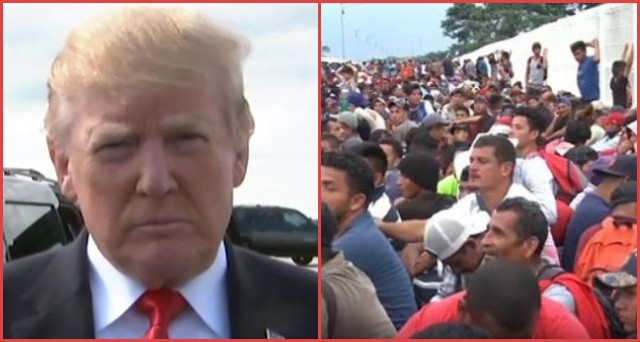 The U.S. has reached an agreement with Mexico that heads off the start of tariffs on Monday. The deal, announced by President Trump via tweet on Friday night, is said to include plans to return migrants seeking asylum to Mexico, where they will remain until their claims can be processed.

“Reports in the evening indicated that Mexico’s negotiators with Washington have offered to immediately deploy 6,000 National Guard troops to the border with Guatemala. Additionally, Mexico has reportedly agreed to a major overhaul of reasonable asylum protocols, which would require asylum applicants to seek permanent refuge in the first country they arrive in after fleeing their home countries.”

“I am pleased to inform you that The United States of America has reached a signed agreement with Mexico. The Tariffs scheduled to be implemented by the U.S. on Monday, against Mexico, are hereby indefinitely suspended,” he said.

“Mexico, in turn, has agreed to take strong measures to….stem the tide of Migration through Mexico, and to our Southern Border. This is being done to greatly reduce, or eliminate, Illegal Immigration coming from Mexico and into the United States. Details of the agreement will be released shortly by the State Department. Thank you!”

Trump had taken a tough position toward Mexico earlier in the day, tweeting, “If we are unable to make the deal, Mexico will begin paying Tariffs at the 5% level on Monday!” Mexico was able to avoid these tariffs on farm and agricultural products, according to Trump’s announcement.

Mexico promises to deploy its National Guard throughout Mexico, particularly at the border, increase actions to dismantle human trafficking operations to smuggle individuals across the border, and take extra steps to coordinate with the American government to share information and “better protect and secure our common border,” according to a statement from the U.S. Department of State.

“Soldiers and police forced hundreds of migrants in the group — which was mostly from Honduras — to a halt in the southern town of Metapa de Dominguez, about 12 kilometers (7.5 miles) from the Mexican-Guatemalan border,” the report went on to say.

This is a developing story. Check back for updates.