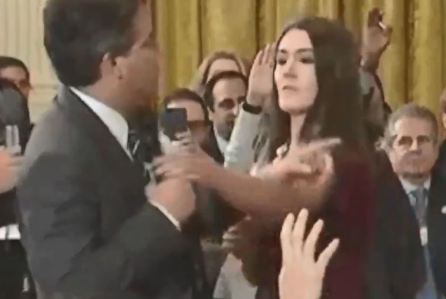 Acosta is an ill-mannered lout who does not deserve to be in the White House press pool. “Let the man ask a question,” is the refrain heard “round the world,” are you serious??? Jimmy baby asked more like 4 questions. The way this always works is: you get ONE question, and maybe a follow up. EVERYONE in the press pool knows this including Acosta. And, Trump DID answer his question.

Jim Acosta has a history of being rude, disruptive, and a jerk. He is also being discourteous to his fellow journalists, (not to mention the president) who have their own stories to write and want to ask their own questions. This is why everyone is limited in the number of questions they can ask. Acosta however thinks he is above the rules and that he is special (remind you of anyone – like Hillary Clinton maybe?).

Trump has put up with his crap for a long time; Acosta got what he deserves and should have been thrown out long ago for his disrespectful treatment of Sarah Huckabee Sanders and President Trump.

The next piece of fake news is: Trump always calls the media “the enemy of the people.” Incorrect – Trump never said the media was the enemy, he did refer to outlets and people that insist on publishing fake news as the “enemy,” big difference. Last but not least, CNN has at least FIFTY other people with White House press credentials, they would most certainly be allowed into the White House press briefings. Only Jim Acosta’s privileges have been revoked, not CNN’s – so lets can the dishonest rhetoric already.

The Committee to Protect Journalists (CPJ) in a completely ridiculous tweet called on the Trump White House to restore poor Jim Acosta’s press credentials. So, Acosta the accoster can be disruptive, asinine, a jerk, and be disrespectful to the president and Sarah Huckabee Sanders, and President Trump should just suck it up and deal with it, which he did for a long time before taking action.

A few reactions to Acosta’s banning:

I guess it is okay to disrespect anyone you want. CPJ what say you? Years ago the reporter would of been fired,but today he is a hero… what a shame.

Certainly there must be guidelines for proper behavior. If not there should be. Every other reporter at the WH behaves properly. why can’t Acosta simply be respectful of the WH not to mention the other reporters? Seems rather simple,

Even a non-Trump fan gets it:

Not a trump fan..but acosta never asks real questions..its just a game of gotcha so he can get screen time..he keeps shouting when it's not his turn

So, it's Ok if @Acosta asks all the questions, and you folks don't get to ask any? The president wanted to get to everyone — not just one dumbass. You folks are unreal.

…..journalists also have a code of practice to be civil & impartial, this profession has been sullied & shamed by those that ignore the truth for their own agenda.

Meanwhile, members of the mainstream media are free to attack, misrepresent, lie, slander, and state utter falsehoods against President Trump with absolutely no consequences. The Main stream media’s allies, Big Tech, better known as Facebook, YouTube, Google, and Twitter among others completely support and back these blatant attacks on Trump, as well as attacking Trump supporters. Social media terrorism (so-med terrorism) is alive and well.

CNN and Jim Acosta are fake news; they thrive on attacking our president, every minute, every hour, of every day. If you think I am exaggerating, just go check out fake news CNN.

The revocation of Jim Acosta’s White House press credentials should be permanent; Acosta has done more then enough to earn it! Now if Trump were to completely ban CNN, then this writer would have a problem with that, but such is not the case. CNN should stop defending Jim Acosta who thinks he is better then everyone else, and has an agenda as well as a desire for personal fame at the expense of the president of the United States. Jim Acosta to put it nicely – is a lame duck.

Since 2013, Christian news magazine The Olive Branch Report has featured the insightful writing and reporting of Greg Holt. His writing has been featured on American Prophet, Conservative Firing Line, DC Clothesline, Eagle Rising, Capitol Hill Outsider, Sons of Liberty Media, Rev. Austin Miles, and others. Greg is also the Publisher and Editor of Inspirational Christian Blogs.