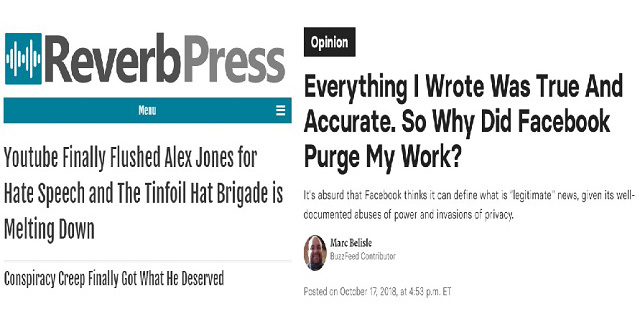 The left-wing propaganda mill Reverb Press cheered when Alex Jones got deplatformed and banned from Facebook, Twitter, YouTube, Apple and Spotify in a concerted, Orwellian purge.

They wrote at least three articles cheering the act of censorship and called for even more: Last week, they got banned themselves in Facebook and Twitter’s latest alt-media purge.

Their world affairs editor from 2014-2017, Marc Belisle, wrote an article in Buzzfeed on Wednesday titled, “Everything I Wrote Was True And Accurate. So Why Did Facebook Purge My Work?” Belisle said, “Facebook’s characterization of the kind of work we did — and our motives for doing it — is wrong, and those who support a free press in America should be very worried about how the company disappeared our page.”

Reverb Press’s last post was on October 11th, the day of the banning, so it appears the site has been shut down.

This is why you defend free speech no matter who is in the crosshairs.