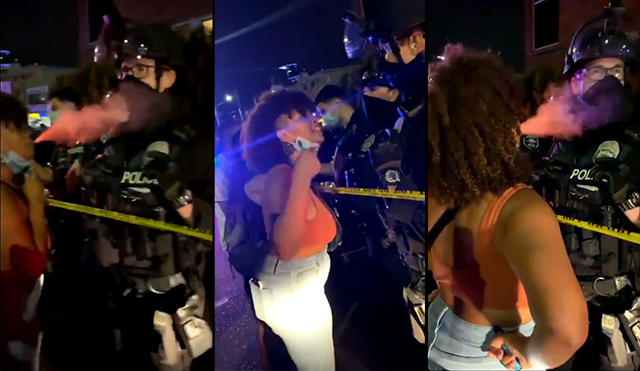 Seattle Black Lives Matter protest organizer Tatyana Paris Swan, aka “Tatii Swan,” was arrested on Monday night on three counts of assault after throwing a temper tantrum and allegedly attacking a cop and spitting on him while calling him a “piece of s**t.”

While Swan was being arrested, the self-described “queer” activist started claiming police were sexually assaulting her as her friend Melissa Lehuta filmed from a distance.

“You’re violating me, you’re exposing me, my boobs!” Swan screamed.

“Get a female police officer now!” Lehuta shouted. “I am demanding you get a female officer to help her, please!”

“How do you know they don’t identify as female?” an officer responded.

“…What?” a stunned Lehuta said. “What did you just ask me? How do I know if she doesn’t identify as female?”

Video from earlier in the day shows Swan was blowing smoke in an officer’s face (in the middle of an alleged pandemic) and screaming at him to “kill yourself” and “shoot yourself in the head so we can all watch!”

(Remember folks, according to the media’s narrative Black people are terrified police will kill them at any moment for any reason without the slightest provocation!)

Shortly before her arrest, she can be heard on video “Kill yourself. All of the Officers can kill themselves. Go on Live on Instagram and shoot yourself in the head so we can all watch.” pic.twitter.com/g5oN0qCha0

Though Swan was booked on three counts of assault she was apparently let out with no bail and without charges.

I guess this is that “systemic racism” we’ve been hearing so much about!