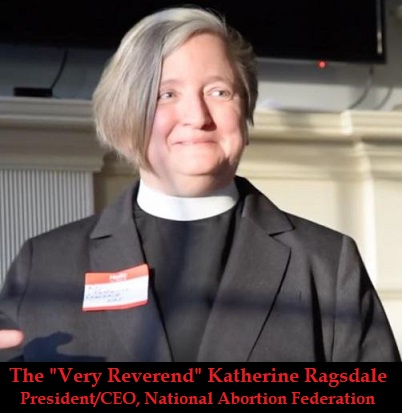 Abortion is the deliberate and intentional killing of an unborn human being. In the United States and countless countries across the world, in the name of a woman’s “right” over her body, that killing is given legitimacy by law and vehemently defended by “feminists”.

The pro-abortion movement is nothing less than a demonic death cult. In recent years, the unremitting corruption of the United States has even led to Christian and Jewish clergy “blessing” abortion clinics. See, for example:

Now, a lesbian Episcopal priest, the “very reverend” Katherine Hancock Ragsdale, takes the abomination further by becoming the president and CEO of the National Abortion Federation (NAF) — a multinational organization of abortion providers and practitioners in the United States, Mexico, Canada, Australia, and many Eurpean countries. According to the NAF, its members “perform” half of all abortions in North America.

Ragsdale is the president and professor of theology of the Episcopal Divinity School in Cambridge, Massachusetts. In a speech at a Jan. 24, 2010 event organized by the Jane Fund, a Massachusetts-based group that raises funds for abortions, Ragsdale called abortion “a blessing” and said she was “angry and fed up” at people who had spoken out again her sexuality and her radical stance on abortion.

Claire Chretien reports for LifeSiteNews, Nov. 5, 2019, that the National Abortion Federation (NAF) has announced that its new president and CEO is Katherine Ragsdale, a lesbian Episcopal “priest” and longtime abortion activist.

When the news was announced, Ragsdale, who had been NAF’s interim president and CEO since September 2018, extolled abortion providers as “some of my personal heroes and modern-day saints.”

NAF’s previous CEO and president, Vicki Saporta, was paid a salary of $392,018 in 2017, according to the organization’s publicly available tax records.

In 2011, Ragsdale married another female Episcopal priest named Mally Lloyd. at the Anglican Cathedral Church of St. Paul in Boston. Bishop M. Thomas Shaw performed the ceremony. It is unclear if Ragsdale and Lloyd are still together, as Ragsdale’s bio on NAF’s website makes no mention of Lloyd.

In an April 2019 speech at a Kentucky Reproductive Freedom Fund fundraiser, Ragsdale claimed that the Bible says nothing about abortion and that it’s dishonest and manipulative to call the human person in the womb a “baby.” Her audience laughed when Ragsdale mocked pro-life advocates who oppose partial-birth abortion by saying: “‘One inch from life,’ they say while showing a picture of a Gerber baby. Apart from ‘one inch from life’ being a lie, the Gerber baby image is a lie. And actually, using the word ‘baby’ is a manipulative lie.”

Comments by NAF-affiliated abortionists, however, paint a different picture. Undercover video from the Center for Medical Progress (CMP), a prolife organization founded by journalist David Daleidan, taken at a NAF conference shows abortionists admitting that the work they do is “killing,” complaining how “difficult” it is to tear apart a fetus, and lamenting that they’re not given a place to discuss the “heads that get stuck that we can’t get out.”

Notorious late-term abortionist LeRoy Carhart, at least eight of whose “patients” had a “medical emergency” in the course of their abortion, also admitted to a BBC reporter, “I think that it is a baby, and I use [the word] with patients.” When the reporter hesitantly asked, “And you don’t have a problem…with…killing a baby?,” Carhart said without flinching, “I have no problem if it’s in the mother’s uterus.”

“For decades, Katherine Ragsdale, a false prophet, has been trying to put religious vestments on child-killing. She led the ‘Religious Coalition for Abortion Rights’ (now the ‘Religious Coalition for Reproductive Choice’), which actually provides rites of blessing for parents about to kill their children, and for the facilities in which the blood is shed…[and also provides] Scripture studies that attempt to say exactly the opposite of what Scripture says about what God thinks of the shedding of innocent blood.”

Fr. Pavone said it’s not surprising that NAF chose Ragsdale to lead it:

“It actually reveals one of the greatest weaknesses of the abortion industry: science is not on their side, logic is not on their side, and history is not on their side. They ran out of arguments a long time ago to try to justify abortion. So now, all they have left is to disguise it in ‘spirituality.’ They try in vain to take the stigma out of abortion — but that effort continues, and that is what this new development represents.