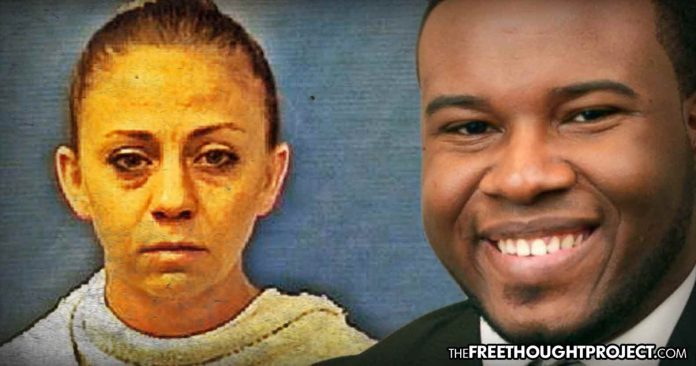 Dallas, TX — As more details unfold in the case of Amber Guyger, the killer cop from Texas, the more ominous the story gets. Since this off-duty cop killed Botham Jean last week, we are finding out that that the official story may not be what it seems.

According to police — who continue to attempt to spin this story into some tragic mistake — Guyger accidentally went into the wrong apartment, mistook Jean for an intruder and killed him.

“Guyger entered the building and walked down the fourth-floor hallway to what she thought was her apartment,” according to the arrest warrant made public Monday afternoon. “She inserted a unique door key, with an electronic chip, into the door keyhole. The door, which was slightly ajar prior to Guyger’s arrival, fully opened under the force of the key insertion.”

“Guyger drew her firearm, gave verbal commands that were ignored by … Jean,” according to the warrant. “Guyger fired her handgun two times striking [Jean] in the torso. Guyger entered the apartment, immediately called 911, requesting police and EMS, and provided first aid to … Jean.

“Due to the interior darkness of the apartment, Guyger turned on the interior lights while on the phone with 911. Upon being asked where she was located by emergency dispatchers, Guyger returned to the front door to observe the address and discovered she was at the wrong apartment,” according to the arrest warrant.

It would have been “uncharacteristic” for Jean to leave his door ajar, Merritt added.

“He’s a very meticulous young man,” Merritt said. “He paid attention to detail and his security was something that was always forefront on his mind. So when he went into a room he closed the door behind him. He locked the door; he put his keys in a specific place.”

Indeed, it does. At no time, according to the warrant, does Guyger say what “verbal commands” she gave. What’s more, any verbal commands she did give were entirely irrelevant as she was the intruder—not Jean.

What’s more, according to the attorneys for Jean, when Guyger was on the phone with police, she had to go outside to verify the address of the apartment—implying that she knew she was in the wrong apartment from the start.

“From the fact that when you look at an affidavit and I’m thinking that I’m at my house and I call 911 because someone was just shot,” Attorney Daryl Washington said. “Well, the very first thing that I’m going to do is I’m not going to go outside and look at my address? I’m going to give them my address right there on the phone. I’m going to say I’m on the phone. My address is this. Why did she have to go outside to verify the address? It makes no sense whatsoever.”

“Independent witnesses have already come forward to say that they heard this officer pounding on the door and demanding to be let in,” Lee Merritt, one of the attorneys representing the Jean family, told ABC News. “The contradictions begin to build from there.”

Jean’s family also pointed out that it would have been incredibly unlikely for Guyger to mistake Jean’s apartment for her own as he had a distinct red door mat which would have been enough for the cop to know she was at the wrong place.

The hallway outside the apartment where Botham Jean was shot and killed by a Dallas Police officer. pic.twitter.com/2xN9xqppRC

Naturally, however, the police union is coming to the defense of one of their own. The union is claiming that those who question the official version of events are doing so for political reasons.

“Don’t get me wrong. She’s going to have to answer in a court of law,” Sgt. Mike Mata, president of the Dallas Police Association, said Tuesday. “But it needs to be fair and unbiased and right now it’s not unbiased. It’s beginning to turn into a political hunt.”

According to the union, trying to get the facts of an innocent man’s death is akin to a witch hunt. Showing his dedication to the thin blue line and not to justice is the fact that Mata even went out of his way to offer his praise for this killer cop.

“I’ve met her on several occasions,” Mata said of Guyger. “She has an impeccable reputation. She is a hard-charging, go-getting officer, who has put a lot of bad people in jail.”

“I’m going be honest with you, Mr. Jean was what all us parents hope our kids turn out to be,” he said of the church-going native of Saint Lucia, who worked at the prestigious accounting and consulting firm PricewaterhouseCoopers in Dallas.

“He was an amazing individual, who had an amazing life ahead of him, who had done great things in his life. His loss is a loss to the city. But hanging out this officer, that’s not the right thing to do.”

From his reading of the arrest warrant affidavit, the cop apologist Mata said, “you can understand how a mistake can be made.”

Mistake or not, Botham Jean is dead. He was gunned down in cold blood in his own home by a police officer. He had done nothing wrong, harmed no one, and his death was entirely unjustified.

Merritt said that at the end of the day, he remains optimistic that justice will prevail and that the manslaughter charges Guyger currently faces will be changed to accurately reflect the reality of the situation.

“We believe that the appropriate charges would be the charges of murder,” Merritt said.