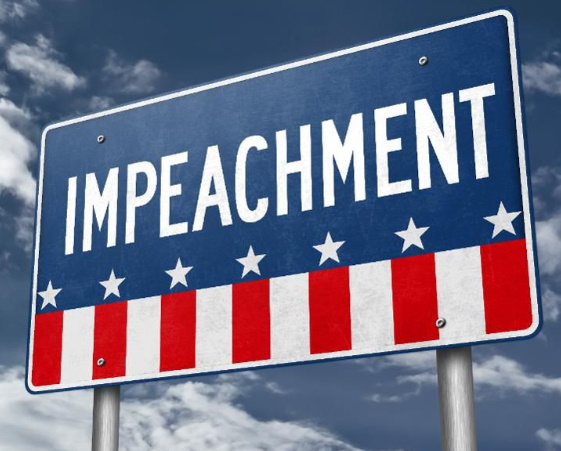 “[T]he President must be held accountable for his betrayal of his oath of office, betrayal of our national security, and the betrayal of the integrity of our elections.” – NancyPelosi, September 24, 2019

With all the “impeachment” talk captivating the news cycles on the usual suspect cable and alphabet news channels, it is well past time that we address what an impeachment is and the meaning of “high Crimes and Misdemeanors”.

If you ask the man on the street what “impeachment” means most often the response would be that it means removing the president from office. This common thought is incredibly wrong.

An impeachment is tantamount to an indictment. Once a president – or any federally elected official, I might add – is impeached, a trial is held. If convicted, it is then – and only then – that the president is removed from office.

But one thing to keep in mind here is this. Impeachment – and even an impeachment trial conviction – doesn’t carry any criminal weight. Why? Because impeachments and their subsequent trials are one-hundred percent political in nature, and a cursory examination of impeachment and the meaning of “high Crimes and Misdemeanors” bears this out.

To that end, the farce that is taking place under Nancy Pelosi’s House of Representatives is all political theater meant to complicate the 2020 General Election and little else.

A white paper published and footnoted in the Notre Dame University Journal of Legislation by Dennis J. Owens is a very informative, fact-based piece of academic writing that every American should read. It explains:

“An impeachment and impeachment trial are not judicial activities. That is, they are devices designed to resolve an essentially political question: shall this person continue to hold this office to which he was elected or appointed? It uses a political forum: the Congress. And, upon conviction, its sanction is political: removal from office and disqualification from further office. The judicial coloring of the proceedings is genuine enough. The House of Representatives hands down the articles of impeachment while styling itself ‘the grand inquest of the nation.’ This is often described as being the ‘equivalent of an indictment’ from a grand jury. The Senate then becomes ‘the high court of impeachment,’ conducts a ‘trial’ and renders a ‘verdict.’ Furthermore, the Chief Justice of the United States presides.”

Supreme Court Justice Joseph Story is quoted as saying in “Commentaries on the Constitution of the United States”:

“But, regardless of the trappings, the process’ forum, question and sanctions remain essentially political. ‘The critical focus should be, therefore, not on political animus, for that is the nature of the beast, but on whether Congress is proceeding within the limits of “high crimes and misdemeanors.”’ Justice Story noted that impeachment was ‘proceeding purely of a political nature. It is not so much designed to punish an offender as to secure the state against gross official misdemeanors.’”

So, much to the surprise of many Americans, impeachment is not about criminal activity (although separate proceedings can take place after a POTUS is removed from office) it is about politics. That we believe otherwise is the fault of the political parties and their commandeering of the government. Remember, we have been misled to believe that politics is government. It is not and George Washington warned us about this very manipulation of the truth in his Farewell Address:

“However factions (read: political parties) may now and then answer popular ends, they are likely in the course of time and things, to become potent engines, by which cunning, ambitious, and unprincipled men will be enabled to subvert the power of the people and to usurp for themselves the reins of government, destroying afterwards the very engines which have lifted them to unjust dominion.”

But, I digress. Back to the subject of impeachment and high Crimes and Misdemeanors…

“The President, Vice President and all civil Officers of the United States, shall be removed from Office on Impeachment for, and Conviction of, Treason, Bribery, or other high Crimes and Misdemeanors.”

John Doar, Majority Counsel of the Judiciary Committee’s Impeachment Inquiry Staff during the trial of the impeachment of Federal Judge Halstead L. Ritter, stated, regarding high Crimes and Misdemeanors:

“In deciding whether this further requirement has been met, the facts must be considered as a whole in the context of the office, not in terms of separate or isolated events. Because impeachment of a President is a grave step for the nation, it is to be predicated only upon conduct seriously incompatible with either the constitutional form and principles of our government or the proper performance of constitutional duties of the presidential office.”

And yet the Pelosi led US House of Representatives is bullying ahead with an “impeachment inquiry” that centers on a single political event – and one that is arguably within the rights of the POTUS, and doing so with loaded dice.

Why is this executing a political move with loaded dice? Two reasons. First, the preparatory work that led to this moment was done behind closed doors excluding any Republican. And Second, the resolution does not guarantee the minority party subpoena power. That power is subject to approval by the Democrat/Progressive chairmen.

To further demonstrate that the Pelosi-led impeachment effort is political we have to look at its chances in ending in the removal of President Trump. Conviction in the US Senate requires a two-thirds super majority vote in the affirmative; 67 of the 100 Senators have to vote to convict to affect a president’s removal from office. As it stands currently, the US Senate is dominated by Republicans. Even after the 2020 General Election – should President Trump win re-election and the Senate fall to the Democrats – a super majority vote for conviction is a fantasy.

All these impeachment actions do nothing more than damage our country and continue the manipulation of the American people into believing false narratives constructed purely for political purposes. In fact, while we are considering high Crimes and Misdemeanors, isn’t that exactly what the stewards of these impeachment inquiries are perpetrating on the American people?

To that end, shouldn’t impeachment inquiries be started against Nancy Pelosi, Adam Schiff, and Jerry Nadler for abuse of power? Just a thought…

Courtesy of The Washington Standard
Frank Salvato is a partner at TRR Consulting Group, LLC, a reputation management and organizational strategies group. He serves as managing editor of The New Media Journal. His writing has been recognized by the US House International Relations Committee and the Japan Center for Conflict Prevention. His analysis has been published by The American Enterprise Institute, The Washington Times, and Accuracy in Media, and is syndicated nationally. Mr. Salvato has appeared on The O’Reilly Factor on FOX News Channel and is the author of six books examining internal and external threats facing our country. He can be heard twice weekly on “The Captain’s America: Third Watch” radio program syndicated nationally on the Salem Broadcasting Network and is a host on The Underground Podcast Network.
(Visited 1 times, 1 visits today)
Share
Tweet
Share
Pin