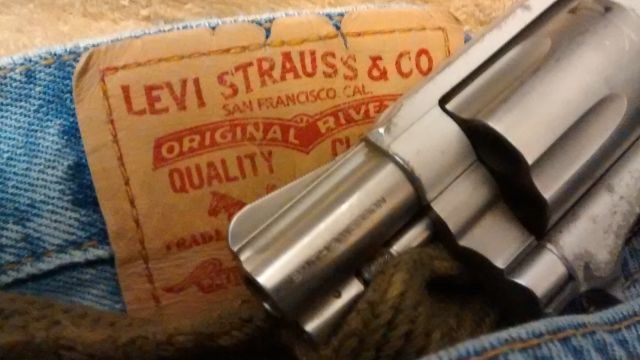 Levi jeans are often associated with gun-toting cowboys in the minds of consumers.

In November 2016, the CEO of Levi Strauss & Co., the corporate owner of Levi jeans, virtue-signaled in an open letter on LinkedIn, asking that gun owners not bring firearms into Levi stores, offices, or facilities, even in states where it’s permitted by law.

Now, in a Sept. 4, 2018 op/ed in Fortune, CEO Charles “Chip” Bergh declares himself a believer in all the false-flag shootings from Sandy Hook to Parkland, and the company Levi Strauss a supporter for “gun violence prevention”.

Bergh begins by saying that he and his company were attacked after his 2016 open letter, “But these personal attacks pale in comparison to the threats that activists and survivors from Parkland, Sandy Hook, and daily incidents of gun violence face every time they speak up on this issue.”

Then Bergh describes why Levi Strauss is “stepping up” its support for “gun violence prevention”:

As president and CEO of a values-driven company that’s known the world over as a pioneer of the American West and one of the great symbols of American freedom, I take the responsibility of speaking up on the important issues of our day very seriously. We can’t take on every issue. But as business leaders with power in the public and political arenas, we simply cannot stand by silently when it comes to the issues that threaten the very fabric of the communities where we live and work. While taking a stand can be unpopular with some, doing nothing is no longer an option.

That’s why Levi Strauss & Co. is stepping up our support for gun violence prevention. You may wonder why a company that doesn’t manufacture or sell guns is wading into this issue, but for us, it’s simple. Americans shouldn’t have to live in fear of gun violence….

I know that Americans, including many of our own consumers, employees, and other partners, hold a wide spectrum of views related to guns. I’m not here to suggest we repeal the Second Amendment or to suggest that gun owners aren’t responsible. In fact, as a former U.S. Army officer, I took a solemn oath to support and defend the Constitution of the United States. But as retired four-star general Michael Hayden once said, “There are some weapons out there that frankly nobody should have access to. And actually, there are some people out there who should never have access to any weapons.”