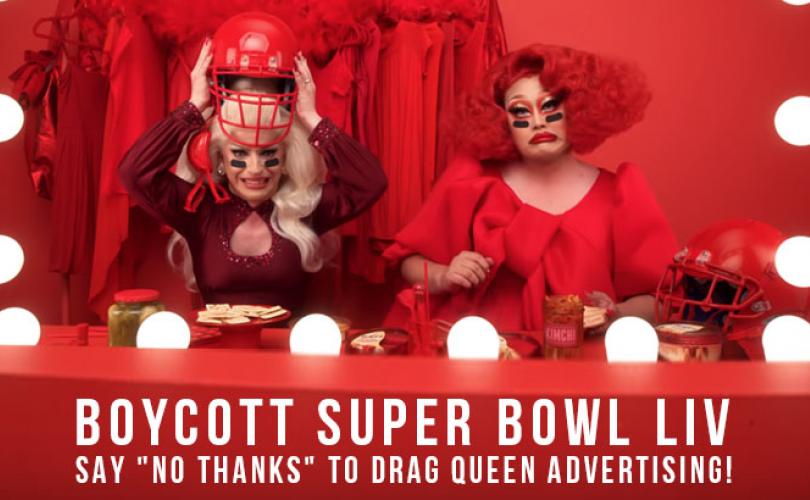 I’m a LIFELONG Kansas City Chiefs fan and they haven’t won a Super Bowl since I was a toddler.

My NFL boycott started long before this.

January 29, 2020 (LifeSiteNews) – A petition started by LifeSite is calling on people to boycott the Super Bowl this year, in protest over Fox allowing an ad featuring drag queens during the football showdown.

In a new low for the Super Bowl, drag queens will appear in an ad, or series of ads, for Sabra Hummus, an Israeli company.

“While two men dressed up as women to sell hummus may seem innocuous, the Super Bowl should be a family-friendly environment where sexually-charged ads are ruled ‘out of bounds,’” said Scott Schittl, one of LifeSite’s campaign coordinators.

Since launching the ad yesterday, it has already been signed by 14,000 people.

Schittl said the ad is just the latest efforts by the mainstream media and their fellow LGBT activists, to normalize drag queens.

“To the average person, drag queens may seem harmless because these men imitate women in the most exaggerated of ways, usually passing for comedic caricature. But, drag queens are part of a morally dangerous ideology, which seeks to confuse young minds as to the reality of human nature and the reality that there are only two sexes, male and female,” said Schittl.

“In this way, they help to promote gender ideology and other fantasist beliefs,” he added.

Lately, the Drag Queen Story Hour phenomenon has been meeting with opposition in almost every corner of the country.

Keep those Drag Queens off of our televisions Fox!

Families watch it together.

It’s bad enough that we are dealing with the aforementioned Drag Queen Story Hours all over America.

Maybe next year they can put the players in skirts to help support the cause.

I don’t watch NFL football and no longer buy merchandise because of the tax exempt status the league once had, while making BILLIONS of dollars.

I still love my Chiefs and hope they win, but I refuse to support the NFL.

I’ll check the score online because I still read about the team when I can.

I’d actually watch the game if they’d put those Drag Queens in pads and let them line up for kickoff.

The NFL and Fox News have both stooped to new lows.