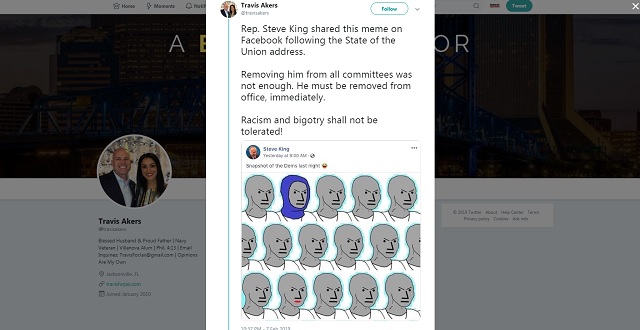 They’re coming for our memes.

Liberal activist Travis Akers on Friday called for Republican Rep. Steve King to be banned from office for sharing an NPC meme on Facebook after Trump’s State of the Union.

“Rep. Steve King shared this meme on Facebook following the State of the Union address,” Akers said. “Removing him from all committees was not enough. He must be removed from office, immediately. Racism and bigotry shall not be tolerated!”

He stated plainly he has no sense of humor:

This is what an NPC short circuiting in real time looks like.

And here we have an NPC being offended by an NPC meme. Very ironic.

In case you were wondering, they’re not joking:

Just another justification why he should not be in Congress.

Buzzfeed called for this boomer meme to be banned just one day before:

Twitter is allowing this altered photo comparing women members of Congress who wore white to the State of the Union to the KKK to circulate on its platform despite its own policy that doesn't allow “symbols historically associated with hate groups.”https://t.co/60aFpx4OJl pic.twitter.com/Z4RVBsFyKa

As Paul Joseph Watson noted yesterday, they want to ban our memes:

All opposition to the establishment must be shut down in advance of the 2020 election.

Democrat 2020 favorite Kamala Harris suggested on Tuesday that memes which cause libs offense are a matter of “national security” which need to be “deal[t] with.”

This is how desperate they are.

As Ann Coulter told Alex Jones last year after he was banned from the internet:

“Consider how strong liberals consider their arguments. They’ve got all of the mainstream media, one hundred percent. ABC, NBC, CBS, all the cable, the major newspapers, the major news magazines, they’ve got Yahoo, AOL. They have the Swamp, they’ve got Hollywood, they have Silicon Valley. And now they’re down to the last corners of the internet.”

“Oh no! Conservatives can speak to one another, we must shut it off!”