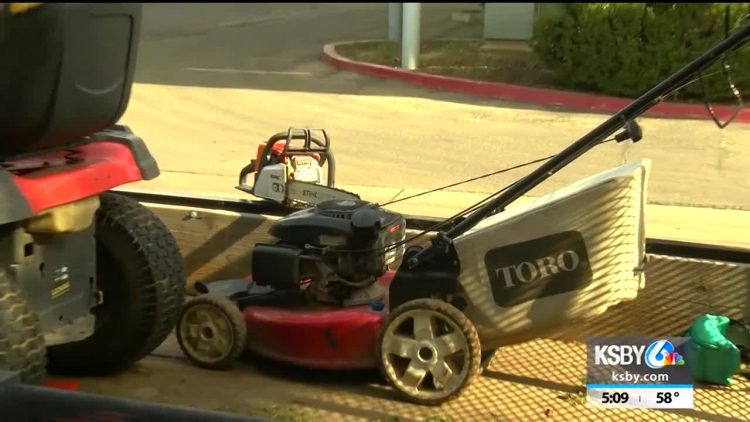 As previously indicated, there are only two types of people in the united States of America – constitutionalists and anti-constitutionalists. You either support the Constitution or you don’t. There is no picking and choosing, like a Chinese buffet. Any interpretation outside of the framers’ intent is wrong and leads to usurpation by government. With that said, any individual proclaiming to be a constitutionalist cannot support a ban of any kind because the government is not authorized by the Constitution to ban anything – that goes for government at all levels.

With that being said, it has been reported that the State of California, with its firearm restrictions, Red Flag laws, and confiscation schemes against the citizenry, has now decided to “ban” gas powered lawn and garden equipment and tools. Yes, you read that right. Because 60 California cities having some type of ban on gas-powered lawn equipment, the State is considering making these types of bans statewide.

If you have any gas-powered gardening tools, you may be forced to give them up soon.

California is considering a statewide ban on the equipment.

At least 60 cities in California have some kind of ban on gas-powered garden tools, but now state regulators are concerned about the impacts these tools could be having on the environment.

According to the California Air Resources Board, running a gas-powered lawnmower for an hour will produce the same amount of air pollution as a Toyota Camry driving from Los Angeles to Las Vegas.

There are millions more small off-road engines (i.e.: gas-powered lawnmowers and leaf blowers) in California than there are light-duty passenger cars, according to the board’s estimates.

The board has set a goal of reducing smog from these machines by 80 percent by 2031.

If it wasn’t true, this would be laughable. Okay; it’s still laughable. As many writers in alternative media have warned, when government can implement gun confiscation, it can implement any other tyrannical, despotic “legislation” because the people would have no force behind their noncompliance. And, in order to enforce this ban, government plans to use the force of a gun and “sin” penalties to enforce its tyranny. Moreover, when citizens allow government to institute bans on “things” they don’t like, it will logically follow that government will eventually ban “things” they do. Remember, all of this is being done based on the hoax of anthropogenic “climate change”. This is absolutely industry killing. From sales and manufacturing of this equipment to commercial/residential lawn services, there isn’t one Californian who will not be impacted.

It’s absolutely amazing that 60 Californian cities have moved to implement some type of ban on gas-powered lawn equipment. Why would anyone in those cities, whoever they are, support such a ludicrous ordinance/law? Wonder if the law applies to the city when caring for parks?

As someone who has been the “yard man” for my parents for years, and now just my mother, gas powered lawn and yard equipment is a must have for the size of the property. Moreover, as someone who has difficulty using a gas-powered chainsaw, it presents a tremendous difficulty in pruning and clearing large fallen limbs with an electric powered chainsaw because of a noticeable power difference and having cords long enough to power the electric model. And, in case someone didn’t tell the California State government, those electric powered lawn equipment and devices still have to be powered by the electric power grid – through direct power using a cord or charging batteries, usually operated using fossil fuels.

Jared Harris at Western Journalism had an interesting take on this potential ban.

Seemingly, citizens’ only other choice would be to use hand tools.

In the mind of California politicians, this is worth it to save the world from climate disaster.

According to the California Air Resources Board, a commercial leaf blower running for an hour “emits smog-forming pollution comparable to driving a 2017 Toyota Camry about 1100 miles, or approximately the distance from Los Angeles to Denver.”

Lawnmowers are apparently slightly better for the environment, with an hour of use emitting only what a Camry would in a 300-mile drive.

It’s unclear if the ban would affect other machines using similar small engines, like smaller go-karts and generators, or simply be limited to garden gear.

Imagine all those Hollyweirdo privileged elite having less than pristinely manicured lawns because of this ban. But, don’t worry. The California assembly will just import more illegal alien invaders to use “lawn scissors” for the entitled, self-aggrandizing privileged Hollyweirdo elite.

As Harris pointed out, the proposed ban does not address similar small engines, like generators, needed to power limited household appliances during power outages, which California has experienced this year due to wildfire prevention – that’s a topic for an entire article, so it will be left hanging at this point. Even the large generators installed for entire home use in case of a power outage still runs on fossil fuel – natural gas, if not mistaken.

According to one individual who commented on the story, this was tried by California in the 70s, but did not succeed. Another individual claimed, “I will never give up my lawnmower willingly to any tyrant. They will have to pry my cold, dead hands from the handlebars of my zero-turn mower!” Still another individual posting a comment stated, “I’m in agreement. I’ve got several acres to mow and I ain’t about to do it with no hand mower. Can’t string that much extension cords and can’t see no sense in doing it in the first place.” One individual suggested setting a “pre-condition that the Governor first has to do his own lawn with hand scissors” before enforcing this type of draconian law.

Another commenter hit the nail on the head with his/her comment. “IF they could ever enforce this law, then they’d go after the people who aren’t mowing their lawns any more ….. a win/win for crooked collection of crooked fines if I ever heard one !!!”

While the comments by these individuals echo the sentiment that government is acting in a tyrannical manner against citizens, the anti-constitutionalist control of California has been emboldened by citizens failing to stem the tide of bans on even the simplest of items. Let me explain.

The State of California decided to ban restaurants from providing one-time use plastic straws unless the customer asked for the item. The city of Los Angeles followed with an ordinance that banned the use of one-time use plastic straws. True to form, a “cottage industry” of “upscale straws” with elegant carrying cases, “along with necessities” of cleaning brushes, “straw squeegees and dental-friendly silicone tips” popped up. Wonder how many of Governor Jerry Brown’s friends are in this new “cottage industry”? Waitresses, waiters, and restaurant owners became fearful of “the straw police”.

The ban seemed innocent enough; however, Representative Devin Nunes (R-Tulare) expressed his “frustration” when encountering the ban upon dining out.

The Los Angeles Times reported in 2019:

In March, Rep. Devin Nunes (R-Tulare) expressed outrage on his Twitter account over his own experience of eating out. “At restaurant tonight waitress asks if we want straw,” Nunes tweeted. “Says she has to ask now in fear of “THE STRAW POLICE”. Welcome to Socialism in California!” (The tweet generated 36,000 comments, many of them in support of reducing waste.)

How many Californians supported this “plastic straw” ban but will now balk at surrendering their gas-powered lawn equipment and devices?

Any ban by government is unconstitutional and infringes upon an individual’s right to choose. Moreover, these bans are being implemented based on a hoax – anthropogenic climate change.

Simply put, any citizen who supports government banning anything will soon find out that government will eventually ban something that effects that citizen. Unfortunately, many citizens are too busy wanting to butt into everyone else’s business that they are willing to throw the Constitution out with the baby when discarding the bath water.

Guns, plastic straws, and now gas-powered lawn equipment and devices. Don’t think it will stop there either. Californians have proven to the tyrannical despotic California legislature they are willing to acquiesce to their derangement by buying into their snake-oil hoaxes, which will lead to other bans. How long before the deranged California legislature gets around to gas-powered tractors and tillers used in farming? California moved to regulate the dairy industry to reduce methane produced by cows. It’s true; look it up. And, an entire study was done on it.

One cannot claim faith in God and Jesus Christ and support for the Constitution, then support any type of ban by government. So, Californians, what’s next? What are you willing to impose upon yourself and others in support of a hoax? Remember, when you support a ban on anything, it is likely a ban on something you like, use or support will eventually come under fire by government, making you a hypocrite when supporting bans on some things but not others.

Suzanne Hamner (pen name) is a registered nurse, grandmother of 4, and a political independent residing in the state of Georgia, who is trying to mobilize the Christian community in her area to stand up and speak out against tyrannical government, invasion by totalitarian political systems masquerading as religion and get back to the basics of education.
(Visited 1 times, 1 visits today)
Share
Tweet
Share
Pin