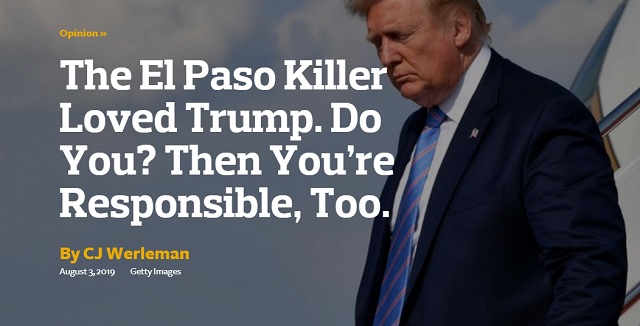 CJ Werleman, who is best known for being a serial plagiarist, wrote Saturday in an article titled, “The El Paso Killer Loved Trump. Do You? Then You’re Responsible, Too.“:

The blame must now extend beyond Trump himself, however, for his role in the White House is pretty now much that of a poll-watching pundit, who crafts his messaging based on what sells best to his base.

Put simply, he ain’t selling what his supporters aren’t buying, and what they’re buying is his racist discord and xenophobia, which is measurably and demonstrably getting Americans killed.

[…] If you still support Trump after all this, then you have demonstrated you’re totally down with his brand of racist, sexist, xenophobic hatred, the kind that is getting black churches, synagogues, mosques, schools, cinemas and malls shot up by far-right psychopaths all over the country.

If this is you, then you are in the words of US Secretary of State Hilary Clinton an irredeemable “deplorable.”