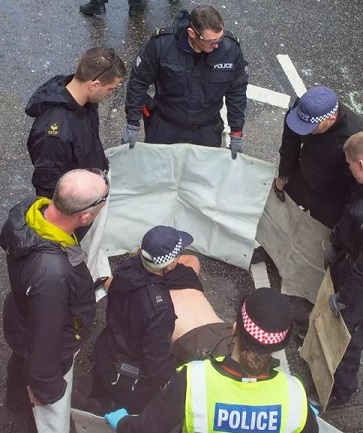 Joe Roberts reports for the UK Metro that on April 25, 2019, the final day of the Extinction Rebellion (XR) eco-protest in London’s financial district, a woman glued her breasts to the road outside the Goldman Sachs offices.

Several police officers surrounded the woman and put up screens to shield her from the public, but she was spotted by passengers on a double-decker bus, lying face down with her top up to her neck. One of the passengers, Jamie Lorriman, took the picture below.

Cimate change activists targeted London’s financial districts to highlight what they call the business world’s “role in our collective suicide”. An XR spokeswoman said “the financial industry is responsible for funding climate and ecological destruction and we are calling on them, the companies and the institutions that allow this to happen, to tell the truth.”

ER demonstrators temporarily blockaded the London Stock Exchange by gluing themselves across entrances to the building. The protesters were “unglued” before they were taken away in police vans. Scotland Yard said 26 people had been arrested on suspicion of aggravated trespassing.

Elsewhere, five protesters including 83-year-old grandfather Phil Kingston clambered onto the roof of a DLR (Docklands Light Railway) train at Canary Wharf station in east London, holding signs saying “business as usual = death” and “don’t jail the canaries”. British Transport Police (BTP) used ropes, ladders and harnesses to remove them from the roof. Five people were arrested on suspicion of obstructing the railway.