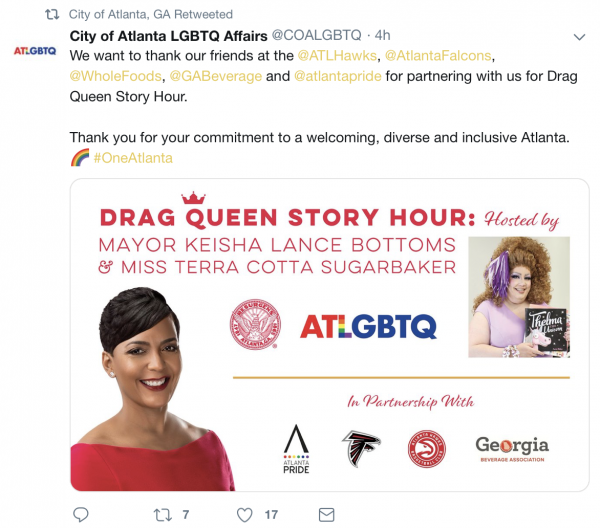 Just when you think that things can’t get any more bizarre, they always do.

For those who have been following the insane Drag Queen Story Hours, happening across America, you may find it heartening that the Fulton County library system pulled support for such an event.

Unfortunately, they were unsuccessful to keep the trash out of Atlanta because liberal Mayor Keisha Lance Bottoms then invited one of the drag queens to perform at City Hall.

Atlanta Mayor Keisha Lance Bottoms has invited a drag queen to hold a children’s story time at City Hall after the county library system pulled its support for the event to be held at an Alpharetta branch.

Miss Terra Cotta Sugarbaker and all of our LGBTQ friends are always welcome at Atlanta City Hall. How about we host your next story hour? @CityofAtlanta—let’s make it happen! #OneAtlanta 🌈 https://t.co/gj3eUIRZSC

The invitation was accepted and the first event was actually held at City Hall just over 2 weeks ago.

Atlanta Mayor Keisha Lance Bottoms will be hosting the event. This event came after the county library system pulled its support for a “Drag Queen Story Hour” reading event at an Alpharetta branch.

The event was eventually put back on the calendar, but Miss Sugarbaker was met with some hostility once arriving to the library.

Regardless, the reading still had a sold-out show and Alpharetta Mayor Pro-Tem Donald Mitchell attended the event to show his support.

“That’s the beauty of public spaces, like a library. They should offer something for everyone, and they should be a safe space for everyone,” Igarashi-Ball said.

Igarashi-Ball has been a part of these library readings for the last two years. He reads mostly at charity events and public libraries around the Atlanta area.

So the library system eventually caved but the Mayor wanted the event at City Hall anyway.

Did you notice the phrase “sold-out show” in the above?

They did not actually sell tickets to the June 29th event, but they did require reservations. You can see more at this Event Brite site.

Here is a video report from Fox 5 Atlanta:

It’s good to hear that there were some demonstrators that were against the event.

They may have outnumbered the supporters but we won’t hear that from the liberal media.

And… as for the sold out show claim…

I counted 13 kids in the above screenshot.

There are over a million people in Fulton County, so despite the hype we can rest assured that MOST of them are still sane.

But what the hell were the parents of those 13 kids thinking?