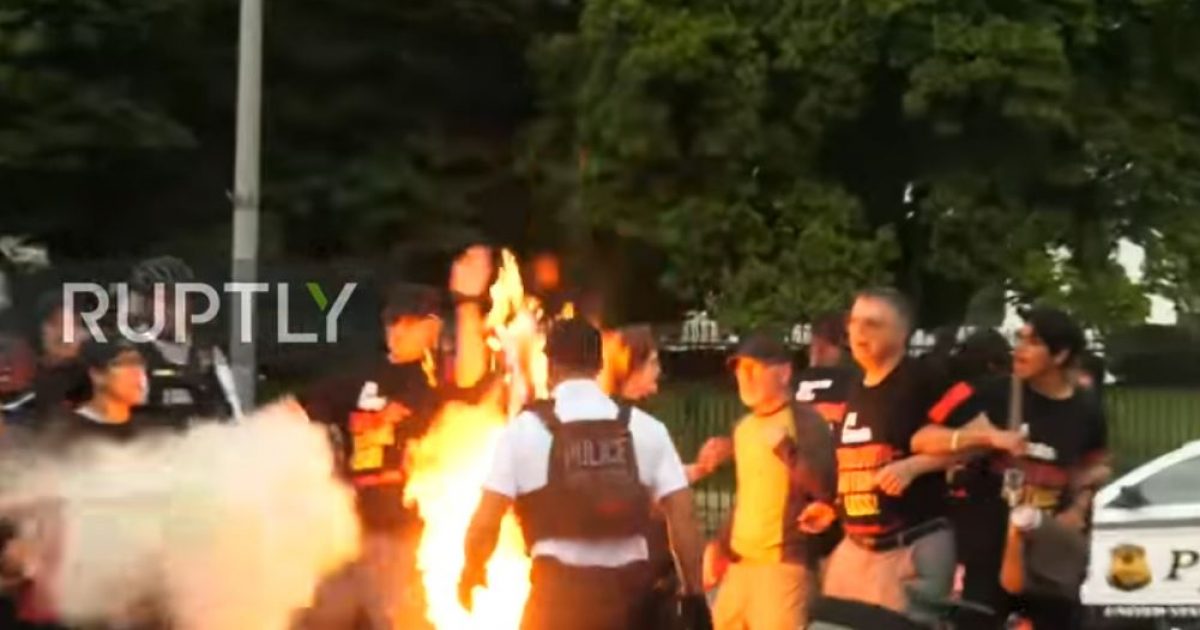 During a protest calling for a “world without America” on Thursday, members of the Revolutionary Communist Party burned American flags outside the White House about an hour before President Trump was scheduled to speak at the Lincoln Memorial as part of his “Salute to America,” Townhall, the Washington Examiner and others reported.

According to the Examiner, three people were detained and two officers were sent to the hospital for treatment:

Carl Dix, a Revolutionary Communist Party member, told the Washington Examinerofficers asked who burned the flags before making the initial arrests. Dix said the third person detained is not a member of the party but defended the flag-burners. That person was apparently released without being charged.

In a statement, the Secret Service said two officers “received minor injuries while attempting to make arrests” and were taken to a hospital for treatment.

The Supreme Court has found flag-burning protected by the First Amendment, but the Secret Service said Johnson and the other man were arrested on different charges. One faces a charge for “felony assault on a police officer and malicious burning” and the other “for obstructing a police investigation and resisting arrest.” The agency did not identify either man by name.

Footage of White House flag burning ahead of Trump's #SaluteToAmerica

A man who identified himself as a veteran grabbed the burned flag #FourthofJuly pic.twitter.com/nJdWlMpdKp

Joey Johnson was just arrested by the Secret Service after burning an American flag outside the White House #FourthofJuly #SaluteToAmerica pic.twitter.com/eFbRn2dlhC

Here’s another video posted by USA Today. Of course, there’s more than a bit of bias in this “report” as you can clearly see:

Here’s a third, posted by Ruptly:

Protest group burns a second Americam flag in front of the White House. It was put out by Secret Service. pic.twitter.com/twd7AxAzyz

A statement released to the Gateway Pundit by the Secret Service said:

At approximately 5:30 p.m. today U.S. Secret Service Uniformed Division Officers responded to an incident that occurred on Pennsylvania Avenue involving an individual who was burning an American flag outside the limits of a permit that had been issued by the National Park Service.

Two individuals were arrested, one for felony assault on a police officer and malicious burning, the other for obstructing a police investigation and resisting arrest.

Two Officers with the Secret Service Uniformed Division received minor injuries while attempting to make arrests and were transported to a local hospital for treatment.

This is the modern left.

In June, I opined that Democrats and their allies are deliberately pushing America to the brink of a second bloody civil war. It seems that every day, leftists are determined to prove that assertion correct.