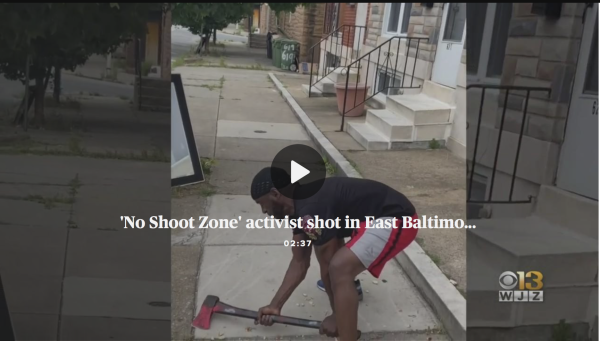 What percent of fatal and nonfatal shootings in Baltimore have a black shooter? 95 percent? 96 percent?

What story could better describe life in Baltimore than what follows as a through the looking glass glimpse into a world white people long ago abandoned for the safe confines of the ‘burbs? [‘No Shoot Zone’ activist shot in East Baltimore on Wednesday, CBS Baltimore, August 3, 2022]:

BALTIMORE — Fresh data from the city’s Open Baltimore website shows 179 homicides were recorded in the first six months of this year, putting the city on pace for one of the deadliest years in Baltimore’s history.

The Baltimore Banner has described the first six months of 2022 the deadliest in Baltimore’s history—and the shootings just don’t stop.

The Baltimore Police Department reports that 10 shootings and five people killed over the past weekend alone along with 17 confirmed robberies.

This morning, police responded to yet another shooting in Southeast Baltimore.

The shooting happened on Rose Street but police found the 46-year-old gunshot victim around the corner on North Luzerne Street.

The gunshot victim is Tyree Moorehead—a former gang member who has been on a years-long mission to stop gun violence in Baltimore.

He initially went to a local hospital to receive treatment for his injuries.

But later in the evening, Moorehead could be seen standing outside of his home in hospital scrubs, surrounded by police. He had ripped off at least one of his bandages, displaying a gunshot wound to his neck.

Neighbors described Moorehead as antagonistic, sharing video footage of him brandishing an ax and sharpening it on the sidewalk.

Over the years, Moorehead spread his message across the city by spray painting “No Shoot Zone” on abandoned buildings, sidewalks, and other objects.

Some of his no-shoot messages are incredibly detailed. Others are generic.

More than 200 of his anti-violent messages have been scrawled across Baltimore.

All of them mark the place where someone was shot and killed in the hopes that the message may prevent additional violence.

Moorehead estimates that he shot about 20 people when he was between 13 and 15 years old.

At 15, he said he had a shootout with police. He served 11 years after admitting to attempted murder.

Back in May, over 60 bullets flew down Rose Street, killing one person and injuring three others. Moorhead was nearby when it happened.

“I actually heard every shot and when I came around here, it was still smoking,” he said.

Several months later, Moorehead was shot on that same street.

Back in 2019, Moorhead was stabbed but he survived going on to spray paint additional “No Shoot Zone” messages throughout Baltimore City.

With “no shooting” activists like Moorehead leading the charge, what hope does Baltimore have?

Seriously… What percent of fatal and nonfatal shootings in Baltimore have a black shooter? 95 percent? 96 percent?