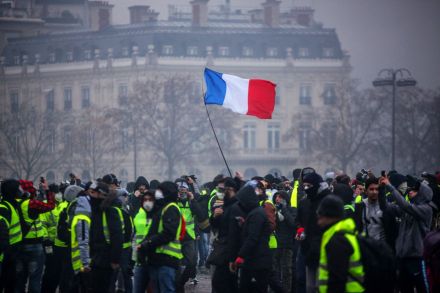 (The Olive) Emmanuel Macron, France’s new president apparently thought the masses would love him for his vehement support of climate change. Macron has subsequently gotten the message that his economic policies in support of battling the non-existent world game changer popularly called climate change – was a huge and costly mistake.

The rioting in France according to CNBC is the worst this country has seen since 1968. In what has been dubbed the “yellow vest” riots – rioters have blocked access to fuel depots, shopping malls, factories, and roads.

If all this wasn’t bad enough, BBC News is reporting that the yellow vest rioters have set buildings on fire, as well as setting cars on fire.

Despite all the rioting and destruction, the French government is not going to be dissuaded from its precious economic policies. People in France are worried and angry about the high price of fuels and rightfully so in this writers opinion. The fuel tax hikes are based on a proven falsehood – climate change, or as it used to be known, global warming.

These tax hikes, or more appropriately – carbon taxes, have raised the price of fuel at the pump by one third with the most popular car fuel, diesel being especially hit hard according to Reuters.

If people cannot afford to drive their vehicles and possibly heat their homes, climate change is going to be of little significance to them. Climate change is a failed science predicated on money, money and profit for the wealthy industrialists and governments that push this propaganda.

Oh, and lets not forget former presidents, like Barack Obama who said climate change is not being “fixed” because – “We could reduce carbon emissions by 30 percent, and it’s not like we would all have to go back to caves and live off fire … The reason we don’t do it is because we are still confused, blind, shrouded with hate, anger, racism, [and] mommy issues.”

During yellow vest protest(s) in France, according to Rush Limbaugh rioters were heard to shout – “we want Trump.”

According to Rush Limbaugh, rioters in France were heard shouting – "we want Trump," Who wouldn't want the voice of reason? #MAGA #ClimateChangeHoax @realDonaldTrump @DonaldJTrumpJr @The_Trump_Train

Is it really any surprise that at least some people in France would call on the name of the one man, that being Donald Trump, who actually had the guts to call out the world on the climate change hoax? The one man who said enough is enough, and pulled the U.S. out of the ridiculous Paris Accords? Which by the way cost the U.S. a ton of money and for what? To line the pockets of other nations and wealthy industrialists, that’s what.

So – when the **it hits the fan, people don’t call on the Obamas, or the Clintons, or any other Leftist self-serving cronies, they call on Donald Trump. Doesn’t that just warm your heart and make you smile?