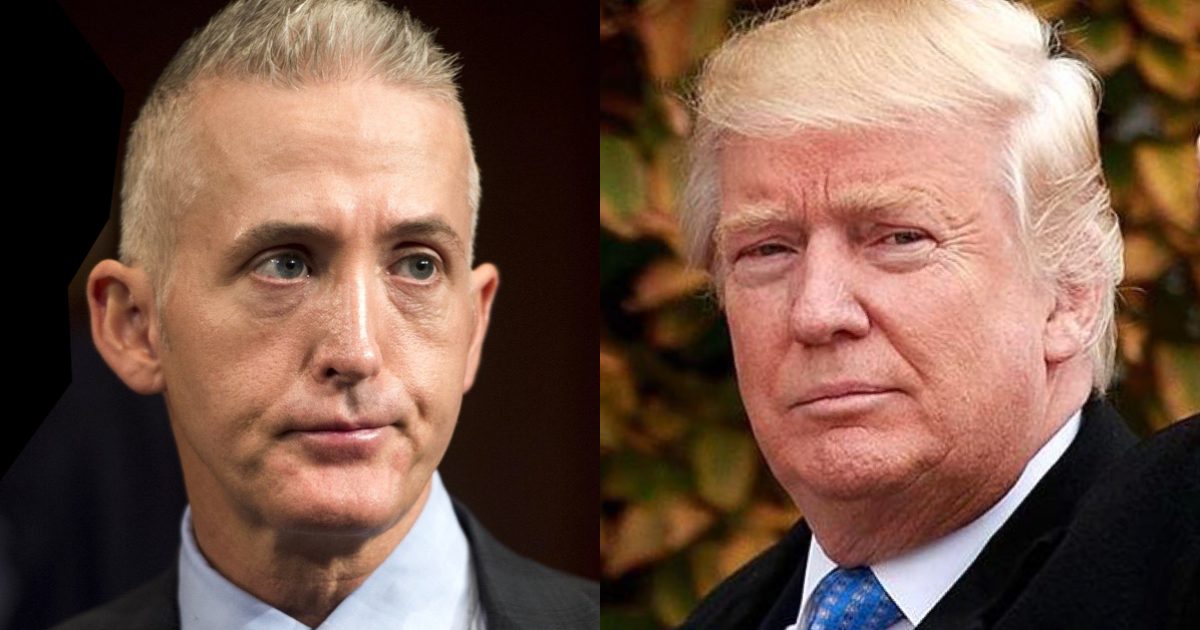 America, enjoy the Christmas season, remembering why Christmas is celebrated in the first place, and then fasten your seat belts for the rough ride coming in January as Democrats are poised to take over the House. With the vitriol Democrats have pumped out against President Trump and his supporters, expect the wrinkle-lipped Democrats who have been sucking on sour grapes to do nothing except engage in investigations into the president, his administration and his 2016 campaign. But, Democrats are not the only threat Trump faces in the upcoming House turnover. According to a hypothesis developed by Rush Limbaugh, Republicans are expected to betray Trump by joining Democrats to oust the 45th president.

Democrats are set to take over the House in January.

But they are not the only threat Donald Trump faces.

And you won’t believe how Rush Limbaugh said Trey Gowdy and other Republicans are planning to betray Trump.

Democrats have already let it be known that they want to destroy Donald Trump through a death by a thousand cuts.

Nancy Pelosi empowered the incoming Democrat committee chairs to launch possibly up to 100 investigations into Trump.

Everyone knew that was coming.

But what nobody expected was for the Republicans to join in.

Rush Limbaugh noted on a recent broadcast that Trey Gowdy made it clear that Republicans would assist Democrats in their plan to take out Trump.

“And because of statements made by Trey Gowdy over the weekend, I now think that the Democrats and all of these investigations are gonna be joined by a whole bunch of Republicans who want Donald Trump gone. Yeah, I know everybody said, ‘Boy, Rush, if the Democrats win the House they’re gonna do nothing but investigate Trump.’ Well, we know that. But I’m just telling you, I don’t think you have any idea what’s coming. I may not either. I mean, it’s gonna be all that they’re gonna do,” Limbaugh stated.

The top rated conservative talk show host was referring to comments Gowdy had recently made on CBS’s Face the Nation.

Host Margaret Brennan asked Gowdy about his request to the White House regarding Ivanka Trump using a private email for government business.

Gowdy stated he was willing to participate in this witch hunt.

“Congress has a responsibility to make sure that the records and the Presidential Records Act is complied with and that is true no matter-no matter who the person is, whether it’s Secretary Clinton or whether it’s Tom Perez or whether it’s Ivanka Trump. So we’ve taken steps, we’ve done more in the last week than in some of my house Democratic colleagues did the entire time we were looking into Benghazi. So I’m at peace with what we’ve done but we need the information and we need it quickly. And then the public can judge whether or not those two fact patterns are similar,” Gowdy stated.

She stated on Good Morning America, “My emails have not been deleted, nor was there anything of substance, nothing confidential that was within them. So, there’s no connection between the two things.” Mrs. Kushner stated there was “no intent to circumvent” White House staff regulations and people will see what they want to see.

Now, here comes the rub. The Republican majority House failed to hold Hillary Clinton accountable for violating federal law. Granted, former FBI director James Comey refused to recommend prosecution of Clinton and Attorney Loretta Lynch failed to perform her duty to prosecute law violators. However, the House of Representatives holds the power of impeachment of officials (Article I, Section 2, last paragraph), including those appointed to office. Articles of Impeachment should have been drafted against both Comey and Lynch; and, if convicted by the Senate, removed from office and “subjected to indictments, trials, judgments, and punishment” consistent with the law (Article I, Section 3, last paragraph).

With the overwhelming evidence against Hillary Clinton, proving her violations of the law, both Comey and Lynch were derelict in their duty, choosing to side with a criminal instead of the law. Republicans, however, are eager to join the Democratic political witch-hunt against President Trump by investigating Ivanka Trump’s use of a private email address and her emails being routed through the White House server.

Here’s the other problem – Trey Gowdy, a lawyer and former prosecutor, is content for the public to “judge whether or not those two fact patterns are similar”, speaking to comparing Clinton’s email server-gate to Ivanka Trump’s use of a private email address rather than an official White House one. Funny, public opinion blasting Clinton for her violations of law, while others were convicted using the same law Clinton violated, was insufficient for Gowdy and the House. Republicans capitulated to a politically motivated law enforcement agency director’s recommendation instead of pushing for indictments through the Attorney General’s office – the recommendation of a law enforcement agency director is just that, a recommendation, and not required to be followed. But, Comey, as a Hillary Clinton stooge and instrument to cover her many crimes, performed as expected by his handler, with Republicans sitting on their hands while holding all the cards.

While Loretta Lynch refused to prosecute Clinton, former Attorney General Jeff Sessions could have, but didn’t. Once he recused himself on the false narrative of Russian collusion, he remained “out to lunch” on everything. The failure of the federal government to prosecute Hillary Clinton for her many crimes is one of the biggest travesties of justice against the American public. Number one would have to be the impunity given to the illegal, illegitimate, Muslim acting as #44.

Even though the truth is on Trump’s side, the reality is that many Republicans in Washington want Trump gone.

They want the Republican Party of Mitt Romney, John McCain and Jeb Bush back so they can push amnesty, global trade deals and endless wars.

And as Trey Gowdy revealed, they will join the Democrats to make Trump’s life miserable.

Left to the “court of public opinion” on Ivanka Trump’s use of a private email address as Trey Gowdy wants would see extreme fringe anti-constitutionalists calling for a trial and imprisonment for the President’s daughter due to their blind hate while they champion the criminal Hillary Clinton as some kind of pariah of virtue. Americans can expect exorbitant amounts of taxpayer money to be spent on hundreds of investigations of President Trump and anyone and everyone in his administration, along with anyone associated with him. But, it won’t be enough for Democrats as they will continue to push through legislation designed to further trample the God-given individual unalienable rights of the people. Their priorities are simple – get rid of Trump and subjugate the American people to the whims of men in government instead of upholding the Constitution and the law.

Republicans are no better. Let there be no mistake here – Trump is not a president who supports, defends, protects and upholds the Constitution for the united States of America. In all honesty, America has not had a president that has honored the oath of office or followed the Constitution regarding their duties while in office in quite some time. And, Trump is more Democratic in his policies than Republican, though his campaign platform portrayed a more constitutional conservative stand. But, Republicans allowed Hussein Soetoro to slide by even when there were over 1,300 documented examples of his crimes and lies while in office, including identity theft through using a social security number not assigned to him. Congress also allowed Bush #2 to slide, as well as #1 and Bill Clinton. Yet, some Republicans are eager to end Trump’s presidency based on “dislike” and being outside the establishment, while other Republicans remain silent, refusing to call out the “party” hypocrisy.

A few years ago, Trey Gowdy was known as “bulldog Gowdy” but as with most dogs who bark a lot, there hasn’t been much in his bite while Republicans controlled the House and Senate. In fact, the “terrorizer of the cat” has more bite than Gowdy. Now, though, Gowdy is ready to take a bite out of President Trump, choosing to stand with those who want Trump gone simply based on personal feelings. One would think Gowdy would be more on the side of the law and Constitution than this. This begs the question, “how, where and when did Gowdy gain ‘his bite’ to inflict injury upon someone who lacked intent while violating regulations?”

While House Republicans have refused to use the powers authorized by the Constitution, one can bet Democrats will use those powers as much as possible, whether feasible and lawful or not. And, if predictions are correct and Republicans join forces with Democrats, Trump’s next two years in office will be riddled with bumps and potholes. As Democrats and Trump-opposing Republicans stand poised to engage in actions against Trump in hopes of a “win”, the only winners will be establishment, charlatan, political shills while the losers will once again be the American people.