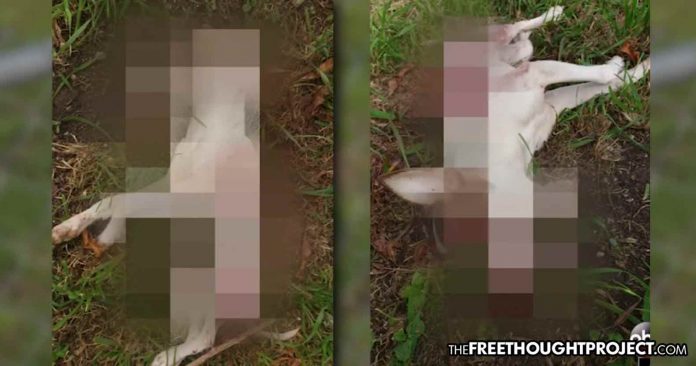 San Antonio, TX — A family in San Antonio, Texas is heartbroken and searching for answers this week after a San Antonio police officer shot and killed their chihuahua in their backyard.

After the officer shot their tiny dog, he gave no reason for doing so and simply left. Neighbors who heard the gunshot were startled and also wanted to know why a cop would open fire in a residential area to shoot and kill a tiny chihuahua.

Pastor Richard Dukes told KSAT that he was sitting on the couch around 3 p.m. on Monday when he heard the shot and ducked for cover.

“I was laying on the couch, and I hear this pop, gunshot,” Dukes said. “Certainly, I’m concerned. My daughter is on the porch. I hollered at her to get inside because I’m thinking that there’s something big going on.”

When Dukes’ daughter ran inside, she told him what she had just seen—which was a public servant murdering a family’s tiny chihuahua.

“Out of nowhere I hear a pop, and that little dog couldn’t have done anything. It didn’t bark, it didn’t do anything, it wasn’t a threat, it was a tiny Chihuahua,” Dukes’ daughter Maryann said.

After randomly killing the dog, police didn’t tell anyone why they were there nor why they opened fire. This left many of the residents on the street with a bitter taste in their mouth.

Some of the residents, including the Lopez family, called the department to ask why the officer killed their chihuahua, but the department initially refused to give an explanation. Dukes brought up a good point, noting that even if they didn’t kill the dog, the police should have explained why the officer opened fire in the middle of the day in a residential neighborhood.

“If an officer shoots his pistol in front of my house, somebody should explain to me why this has taken place. And, the dog was behind the fence,” Dukes said.

After the original news story exposed the officer for killing the chihuahua and then leaving without telling anyone, the SAPD finally spoke up and supported the officer’s decision.

“The officer did, as per protocol, contact the supervisor and let him know the situation, received approval from the supervisor to shoot the dog,” said Doug Greene, SAPD spokesperson, who added that the officer who shot Trixie claimed the dog was on the brink of death.

However, the family took pictures of Trixie after she was shot and no such “protruding intestines” existed.

According to KSAT, SAPD said Animal Care Services was notified, but after numerous checks, an ACS representative said the agency never received a call for a dog in distress at the location Monday. ACS said if it had received a call like that, it would have been a top priority for the agency.

ACS also noted that if a dog is wounded, they would try to save its life before killing it.

Adding insult to puppycide is the fact that the SAPD said the officer who seemingly fabricated this entire story, will likely not be investigated.

Cops killing dogs is, as most of our readers know, a far too common occurrence. But there has since been an increase in police shooting and killing tiny dogs too.

As TFTP reported in January, a graphic video showed a Faulkner County Sheriff’s Office deputy shooting a tiny dog simply because the dog’s owner refused to walk to the road to speak to him. What’s more—just like the SAPD is doing—that department responded by saying no policies were violated.