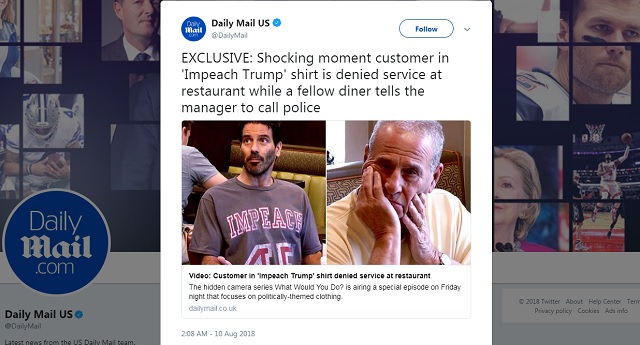 With video after video of Trump staffers, Trump supporters and GOP officials being harassed at restaurants going viral every week, the propagandists at ABC decided to hire actors to stage a scene of an “anti-Trump liberal” being harassed while dining for wearing an “Impeach 45” shirt.

The Daily Mail pretty much reported the fake scene as though it was real:

If you actually click through and read the article you’ll see they admit the “manager” and the “customer” were both actors. As most reality tv garbage like this is totally fake, odds are the “fellow diners” are too.

The hidden camera series What Would You Do? is airing a special episode on Friday night that focuses on politically-themed clothing.

In a clip obtained exclusively by DailyMail.com, one man learns what it is like to walk into a diner wearing a shirt that calls for President Trump’s impeachment.

He sits down and is greeted by another actor portraying the restaurant manager, who informs him that he will not serve him in an ‘Impeach 45’ shirt, prompting one man nearby to urge the manager to call authorities.

‘As long as you’re wearing that shirt, we won’t serve you. He won the election, let him do his job,’ states the manager at the start of the clip.

‘OK great, that’s your opinion.I got my opinion,’ responds the customer.

The exchange quickly draws the attention of nearby diners, including one man who tells the manager: ‘Call the police.’

The customer responds to this by replying: ‘I don’t understand.’

When the manager then repeats the suggestion back to the man as a question he says: ‘Sure.’

He then adds: ‘You’re doing the right thing. Call the police.’

They literally have to stage these scenes just to make libs look like “victims.”

What’s both funny and sad is ABC’s viewers are so stupid they’ll actually think it’s real.

Meanwhile, scenes like this are happening every few days:

To be clear: ANTIFA, an all-white fascist organization, just grew violent and attacked an all-black and Hispanic police force.

Because I, a BLACK woman, was eating breakfast.

Is this the civil rights era all over again? pic.twitter.com/piJfnopniW

Clip of @ModestoProgDems & @joshua_harder allied groups yesterday. A protester attempts to race shame @JeffDenham's wife. You can clearly hear this person scream at Denham "Shame on your Mexican wife" This type of rhetoric has to stop, its fueling hate. @modbee @turlockjournal pic.twitter.com/zDjyKdbCRl

Why doesn’t ABC do a show where they have an old white lady wearing a MAGA hat walk through the streets of Detroit at night?