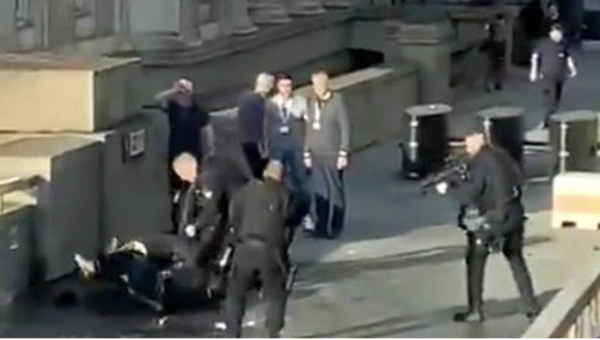 Previously on SBPDL: London Has Fallen: Muslim Population in England Increases 6900% from 1939 to 2017

Get out your calculator. You’re going to need it! Go ahead and count the insanity in the story below, d etailing the latest Islamic terror attack in London, England.

The correct score will win a prize at the end. Happy hunting!

[London Bridge killer, 28, was jailed for eight years in 2012 for plotting to BOMB the London Stock Exchange and build an Islamic terror training camp – but was RELEASED last year and had an ankle tag on when he stabbed two people to death yesterday, Daily Mail, November 29, 2019]:

Anti-terror police have raided a house in Staffordshire area which was linked to Khan.

Assistant Commissioner Neil Basu confirmed that a man and a woman had been killed in the attack.

He confirmed Khan, who was from Stoke-on-Trent had a prior terrorism conviction and had been jailed for eight years in 2012.

He was released on licence in December 2018 and was still wearing a monitoring tag.

Khan was in London yesterday to attend a Cambridge University course for helping offenders reintegrate into society.

The attacker was a convicted terrorist who had served time in prison and was wearing an electronic tag, according to The Times newspaper. The paper added he was attending a Cambridge University conference on prisoner rehabilitation being held at Fishmongers’ Hall and ‘threatened to blow up’ the building.

The man had two knives on his possession when he carried out the attack.

Khan had previously been arrested on December 20, 2010, four days before he and his Al-Qaeda-inspired gang had planned to plant a bomb in the toilets of the London Stock Exchange.

Police found a handwritten list of targets which included the U.S. Embassy and the homes of London Mayor Boris Johnson, the Dean of St Paul’s Cathedral and two rabbis.

The gang also carried out surveillance of other possible targets including Big Ben, Westminster Abbey, the Palace of Westminster and the London Eye.

The group planned to send five bombs in the post to London synagogues and the Church of Scientology headquarters, as well as spreading panic in Stoke-on-Trent by planting bombs in pub and club toilets.

Their plot was foiled after the security services bugging their homes and cars heard discussions of a ‘Mumbai’ atrocity on the streets of Britain, mirroring the guerrilla-style 2008 attack in India.

A maintenance worker who witnessed the London Bridge knife attack claims he was told the assailant had been in prison for terrorism offences.

Jamie Bakhit, a 24-year-old from Purley, Croydon, said he spoke to one of the men who helped wrestle the knifeman to the ground after they were taken to the Salvation Army headquarters to be interviewed by police.

He told said: ‘The guy who was on top of him said he [the attacker] had been in prison for terrorism, apparently.

‘Some of the guys who were on top of him were ex-prisoners and they had all been in the Fishmongers’ Hall. The guy told me he was in prison with the attacker.’

The maintenance worker said he had just turned onto London Bridge and was heading southbound when he saw the four men tackle the attacker.

Mr Bakhit said: ‘As I got on the bridge armed police pulled in front of me. There were already four pedestrians on top of the guy on the floor. ‘One of them [pedestrians] was shouting ‘shoot him in the f***ing head’.

‘I’m still in my van at this point, trying to turn around. Then the police say ‘get out of the van’, so I had to leave it there.

‘I then saw them [police] shoot him three or four times.

‘I was in shock. I wanted to get away. Everyone was shouting run because he had something across his chest. It was crazy.’

Around six members of the public worked to disarm the attacker after he went on a rampage outside Bank station and Fishmongers’ Hall on the north side of the bridge, killing two.

An unnamed hero, who was inside the conference hall, was said to have grabbed a five-inch narwhal tusk from the wall’ and went to confront the terrorist, the Mirror reported.

Did you get them all? Go ahead and read it again. We’ll be right here, waiting for you to finish counting! As we all know, the quality (and condition) of life found in 2019 London is exactly what those brave white pilots hoped to leave their posterity when they took to the skies in the Battle of Britain!