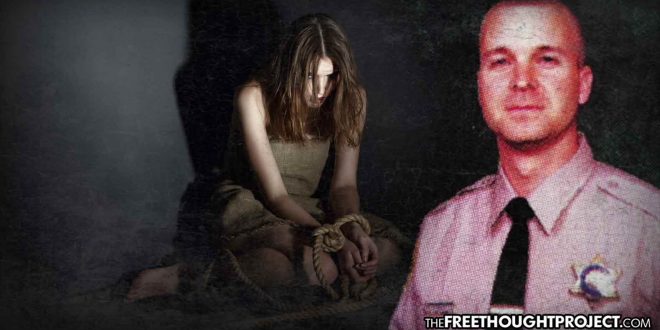 Los Angeles, CA — Imagine finding out your daughter has been sexually assaulted and went to the police for help. And then you learn the sex crimes detective investigating the case then went on to tie up and violently rape your daughter during the investigation. That’s precisely what Los Angeles County Sheriff’s Detective Neil David Kimball, 46, pleaded guilty this week to doing to a 14-year-old rape victim.

Kimball met with the family of the victim in late 2017, befriended the teen, and later tied her up and raped her. He then attempted to intimidate the witness and the family from coming forward, even threatening them at some point during the horrific ordeal.

Being a badge wearing police officer, the detective has already been given leniency by not being convicted for the more serious crimes for which he was initially charged. According to KTLA News 5:

The former detective was initially charged with forcible rape against a minor 14 years or older while the victim was tied or bound.

He was subsequently allowed to plead guilty to lesser charges of a lewd act with a child and unlawful sexual intercourse. He only faces a maximum of three years in jail and we at TFTP suspect he will serve even less time once he shows up to serve his sentence.

In 2017, while serving as a detective with the Special Victims Bureau with the Los Angeles County Sheriff’s Department for sex crimes in 2017, Kimball met with a 15-year-old victim when she reported being a victim of sexual assault. While investigating that case, Kimball befriended the victim and sexually assaulted her.

Kimball’s sentencing will take place on August 8, 2019 at 9:00 am in Courtroom 12 in the Ventura County Superior Court. Based on our reporting of the habits of pedophiles, it is likely not the first time Kimball has sexually assaulted girls, and possibly boys, who were already victims of traumatic sexual abuse.

If you or anyone you know was molested or raped by a sex crimes detective in LA County, please contact the FBI with your story. It is highly likely Kimball has more victims who have remained silent until now.

Pedophiles often seek out positions of power and authority over children so they are in a position to abuse. Priests, teachers, coaches, police officers, counselors, and others are just some of the fields in which pedophiles will attempt to gain employment. Unfortunately, it’s not the first time we have reported on police officers using their badge and so-called “authority” to rape kids.

As TFTP has reported, a study exposed the startling fact that police officers are arrested about 1,100 times a year, or roughly three officers charged every day. Many of these arrests are over unspeakable sex crimes.

Despite the high rate of conviction, the sentences handed out are insultingly low.