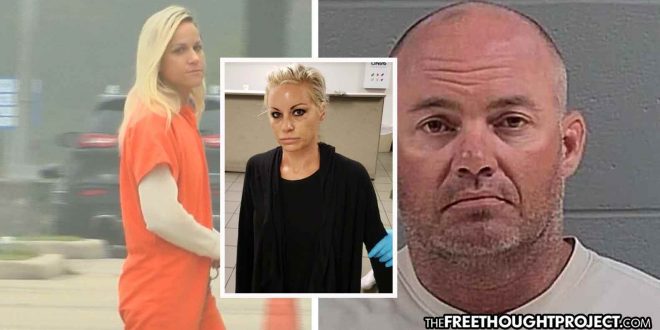 Livingston, LA — As TFTP reported late last year, a high-level Livingston Parish Sheriff’s Office deputy — who commanded the SWAT team — and his wife were indicted on more than 150 felonies for unspeakable crimes against children and animals. Dennis Perkins, 44, and his wife Cynthia Perkins, 34, are accused of multiple counts of child rape and the production of child pornography, among other disturbing charges. Now, another former cop, Melanie Barnett Curtin, 41, of Denham Springs, was arrested Saturday, Feb. 1 as she returned from a cruise in New Orleans.

Adding to the disturbing nature of this case is the fact that Curtin worked for the Livingston Parish Sheriff’s Office starting in 2011—the same department as Perkins. Her ex-husband is also a former LPSO deputy.

After news of her former employment with the LPSO broke, the department issued a statement distancing themselves from the accused rapist.

WAFB reports that the Perkins indictment in December stated that on Nov. 8, 2014, Dennis raped an adult victim. It went on to say that sex was “…with the assistance of a yet unidentified adult female perpetrator.” It is from this claim that the first degree rape charge stemmed.

Sources confirm to the WAFB Investigators that “unidentified adult female perpetrator” was Curtin.

In October, the Perkins were arrested after a months-long criminal probe headed up by the Louisiana Attorney General’s Office. Then in December, a grand jury indicted Dennis Perkins on 78 felonies and his wife, Cynthia Perkins, on 72 felonies.

Judging from the video voyeurism charge, Curtin was allegedly involved in filming the rapes.

Also, according to the Advocate, the pair both face a count of mingling harmful substances, which involves putting harmful substances in food, drink or medicine with intent to hurt someone. According to the indictment, Perkins is accused of ejaculating on various pastries and into bottles of energy drinks that were then ingested by unsuspecting victims. Cynthia is accused of giving them to her students.

According to a source close to the case, the couple was seen in videos and photos committing unspeakable acts with naked children. Horrifying indeed.

WAFB 9 reports, that Denny Perkins was a lieutenant with the Livingston Parish Sheriff’s Office Special Operations Unit (SWAT) before being terminated the week of Oct. 21. He was hired in 2002 from the Walker Police Department. This alleged child rapist commanded an entire SWAT division and was considered a “hero” by the community.

After her arrest, his wife, Cynthia Perkins resigned from her teaching position at Westside Junior High School in Walker. It is currently unknown if the victims in the images were students of Cynthia’s — though the parents of some of here students announced a lawsuit last month.

The investigation found so much disturbing evidence against the Perkins that this top cop and his wife are facing a sentence of more than 6,000 years in prison.

The investigation started after the National Center for Missing and Exploited Children received a tip that the couple was raping children, filming it, and then distributing it to their network.

If you or anyone you know was molested or raped by this couple, please contact the FBI with your story. It is highly likely that they have more victims who have remained silent because their attacker was a SWAT commander.

The evidence in the case is reportedly so overwhelming that Denny Perkins’ attorney has requested to be removed from the case and no longer wishes to represent him.

Even more disturbing is the fact that Dennis Perkins was caught in bed — by his former wife, not Cynthia — with a child in 2013. However, due to state and federal laws that largely limit law enforcement from acting on allegations of grooming, nothing ever happened to Perkins. Instead, the child was sent to counseling and this ‘hero’ remained a cop.

“The counselor also told (the State Police) that he believed Perkins had done this before and would do it again,” the report reads.

“It is a sad day for us, for all law enforcement officers, when you arrest one of your own,” Livingston Parish Sheriff Jason Ard said. “We at the LPSO work hard every day to retain the trust placed in us by our citizens. I understand this was a veteran law enforcement officer, one who had dedicated a lot of time and effort into this community, but as I have said in the past, no one is above the law. This type of alleged behavior will not be tolerated by me or anyone at the LPSO. I do not condone these alleged acts. I am disappointed. I have always considered Denny a friend and a family member. The Attorney General’s Office is leading this investigation. We are assisting and offering to cooperate in any way we can.”

Indeed, it is a sad day when police officers — the ones who claim to protect us — are caught preying on society’s most vulnerable. However, there are a lot of sad days as this situation plays out like a broken record, over and over again.

Matt Agorist is an honorably discharged veteran of the USMC and former intelligence operator directly tasked by the NSA. This prior experience gives him unique insight into the world of government corruption and the American police state. Agorist has been an independent journalist for over a decade and has been featured on mainstream networks around the world. Agorist is also the Editor at Large at the Free Thought Project.
(Visited 10 times, 1 visits today)
Share
Tweet
Share
Pin