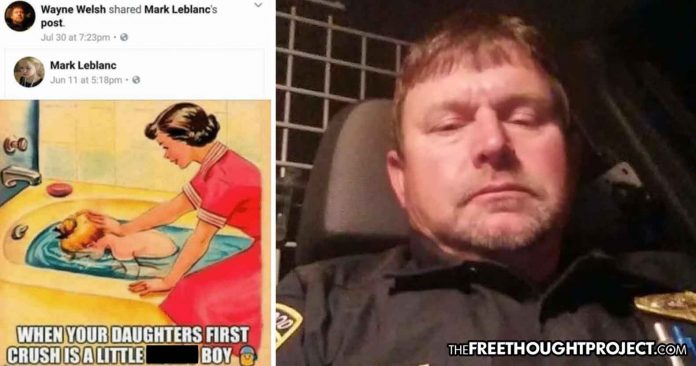 Estherwood, LA – As TFTP reported back in 2017, the assistant chief of police for the Estherwood Police Department, Wayne Welsh resigned after coming under public scrutiny for sharing a racist meme on Facebook that went viral. After initially attempting to defend his actions on the social media website, the officer reportedly submitted his resignation. However, because the system is designed to protect racist and killer cops, this cop has since been promoted to the chief of police.

Tendering a resignation before disciplinary action can be taken is a common tactic among police, as it allows their record to remain untarnished, thus being able to continue operating as a police officer in another municipality – with their new employers being none the wiser as to their previous heinous actions. However, the world knew how racist this man was, yet he was still promoted.

However, his posts to social media say otherwise.

The incident was first reported in 2017 by KATC, which refused to identify the officer in question due to him having not been charged with a crime. Thankfully, social media stepped up to the plate, as a Twitter user going by @Freeyourmindkid found, and posted, incriminating screenshots of officer Wayne Welsh’s Facebook page.

Cops: "You shouldn't fear us if you haven't done anything wrong."

The racist post featured a caption stating, “When your daughters [sic] first crush is a little Negro boy,” with a picture of a white woman forcing a little girl’s head underwater in the bathtub.

Welsh attempted to delete the post — while making numerous other posts in reference to the original post – which were subsequently shared as screenshots by Twitter users.

Welsh reportedly posted an apology after the fact, but it was too late.

“Well, I posted something on Facebook that made a lot of people mad,” he wrote on his now-deleted account. “Well, I’m sorry for what happen. Ya have a blessed day.”

Revealing his disconnect from reality, Welsh reportedly posted about the “race card” and how people want to say he’s a “bad guy,” according to KATC.

“I shared somebody else’s posts and everybody mad at me again,” he wrote. “So Facebook police mad at me.”

“I didn’t really think,” he said in the interview when asked why. “I don’t take it as a racial thing because we don’t have racial around here.”

A short time later Welsh backtracked and offered an apology:

It seems as if Welsh is completely oblivious to the fact that sharing racist memes, when you are an officer of the law, who is supposed to apply the law equally to all people, regardless of race, creed, religion, or color, denotes that you likely lack the ability to treat people equally in your interactions as an officer – and that you most likely harbor racist views towards black people in particular.

Then-Chief Ernest Villejoin Sr. spoke with Welsh by phone at the time, and noted that although Welsh had apologized, he could not allow Welsh’s actions to taint his department, and apologized for the racist post shared by Welsh.

“When I found out about it, I couldn’t believe I had to call him. I called him at work and asked him what the hell is going on,” Villejoin said. “He done it. He said it and he realized what he had done after he done it and he deleted it but it was too late.”

However, after all the apologies and distancing themselves from this racist cop, just three days later, the mayor refused to accept Welsh’s resignation and he merely sent Welsh home for 14 days on a vacation. He returned to full duty after.

This move surprised even Welsh.

“I was surprised,” said Welsh, who expected he’d be asked to resign. “I figured they’d say that would be the best thing with all the heat we were getting.”

After the media attention diminished, things went back to normal and eventually Villejoin retired and Welsh was made interim police chief in March of last year. In November, he put his name on the ballot and ran unopposed to win the official title of police chief.

“It’s disturbing to me,” said Lisa Graybill, deputy legal director at the Southern Poverty Law Center, the Alabama-based non-profit advocacy group. In reference to Welsh’s Facebook post, she added, “I’m sorry to know a public official would put that out and he didn’t resign – he’s been elevated. People of color should be wary to come through that town or do business in that town.”

Michael McClanahan, president of the Louisiana NAACP, agrees, according to nola.com and said Welsh’s rise to police chief was troubling, but not surprising.

“What I take from all of this is when I go through that little town, I better be doing five miles below the speed limit, and I better go through there in the day time and not darkness,” he said. “And tell all my family the same. Don’t stop at no store, just go through there and keep going.”