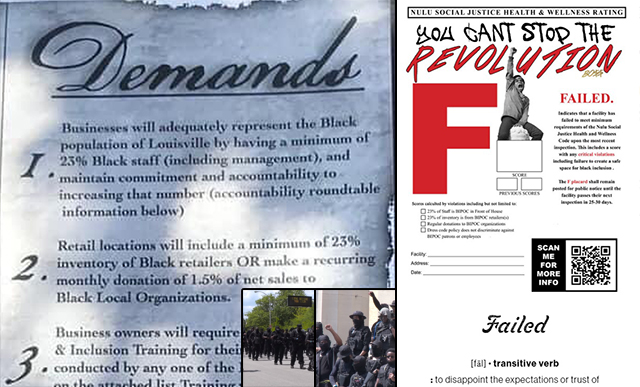 Black Power activists in Louisville, Kentucky are holding heavily-armed marches in the streets threatening to burn the city down and using “mafia tactics” to demand extortion payments from local businesses in the name of advancing their racial interests.

Late last month, an all-black militia calling themselves the “Not F***ing Around Coalition” held an armed march in Louisville and threatened to burn the city to the ground:

"Grandmaster Jay" gave a speech that was 50 minutes long.

In it, he said that if the public doesn't have the "truth" about Breonna Taylor's death, "We are going to burn this motherfucker down."

Another BLM group sent threatening “extortion” letters to local businesses in Louisville demanding they give 1.5 percent of their profits to black organizations or give a wide range of handouts to black people lest they be given a scarlet letter.

They vandalized a business that refusedhttps://t.co/lj6gBOR5U1

From The Courier Journal:

Fernando Martinez, a partner of the Olé Restaurant Group, was one of dozens of business owners in the downtown Louisville district who recently received a letter from protesters laying out demands that aim to improve diversity in the area, which is known for its locally-owned shops and restaurants.

Martinez has publicly denounced the demands on Facebook, calling them “mafia tactics” used to intimidate business owners. And on Thursday, a small group of protesters confronted him outside his newest restaurant, La Bodeguita de Mima, on East Market Street.

“There comes a time in life that you have to make a stand and you have to really prove your convictions and what you believe in,” Martinez wrote in his Facebook post. “… All good people need to denounce this. How can you justified (sic) injustice with more injustice?”

According to a press release, members of the city’s Cuban community will meet outside the NuLu restaurant at 4 p.m. Sunday to support the immigrant-owned business, which “has been subject to vandalism and extortion in recent days.”

The BLM group BO$$, which is reportedly behind the threatening demand letter, has a “Social Justice Rating System” on their website giving local businesses an A, C or F for compliance with their demands. Black Lives Matter (BLM) protesters issued “social justice” and “black liberation” demands regarding “diversity” to a restaurant owner in Louisville, KY, including a directive for “donations” to organizations run by non-whites.

Listed demands from a BLM affiliate in Louisville include racial quotas for staff and ownership of business suppliers, donations to organizations run by non-whites, and adjustment to dress codes. The posters used the acronym “BIPOC” (“black or indigenous persons of color”) as a euphemism for non-white persons:

23% of Staff is BIPOC in Front of House

23% of inventory is from BIPOC retailer(s)

Dress code policy does not discriminate against BIPOC patrons of employees.

Additional demands issued via the letter included the option to give 1.5 percent of revenues to a local “black nonprofit or organization” in lieu of purchasing a minimum of 23 percent of the business’s inventory from “black retailers,” mandated “diversity and inclusion training” for all employees, and displaying of left-wing messaging to support “reparations.”

The posters include a stated commitment to be publicly visible as a public service announcement pending future “inspections” of restaurants and other businesses.

Three varieties of posters with the message, “YOU CAN’T STOP THE REVOLUTION,” were directed at restaurants in Louisville’s NuLu neighborhood with the grades A, C, and F according to a “NuLu Social Justice Health and Wellness Code.”

Posters with the C-grade declare, “A facility that fails two (2) consecutive regular inspections will be under administrative review.” Those with an F-grade include the following message, “[This] facility has failed to meet minimum requirements of the Nulu Social Justice Health and Wellness Code inspection. This includes [a] failure to create a safe space for black inclusion.”

A similar Black Power rally was held in Brixton over the weekend in the UK.

This is a BLM protest in Brixton today.

Mass protests are currently illegal due to lockdown measures.

Yet, London Met Police are out to ensure this protest is carried out safely.

If this were a non-leftist protest, I don’t think the police would have been this nice. pic.twitter.com/fo5lOnoa86

The Public Order Act 1936 prohibits by law paramilitary and political uniforms. Why is the Met Police allowing this to happen? pic.twitter.com/m63fnDQytS

Protesters were seen marching in paramilitary uniforms and as signs were held saying: “You are lucky we only want reparations not revenge.”

If the races were reversed in these stories and it was heavily-armed white nationalists marching through the streets giving lists of demands to local black-owned businesses it would be the top story not only in America but throughout the entire world.

Instead, the story is being completely ignored by the national media and local media is airing their grievances as though they’re perfectly legit.