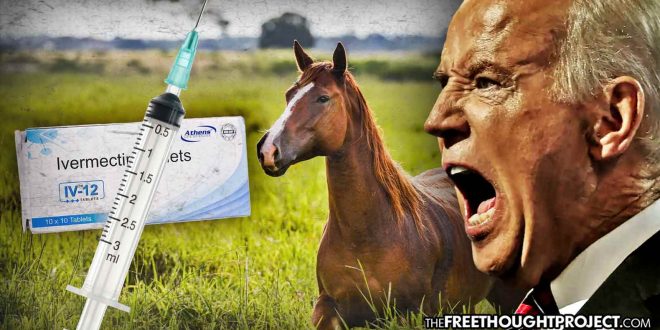 On Thursday, the United States made a giant leap forward into a despotic and fascist future in which the government owns our bodies and can force us to do whatever they please. Thanks to the massive propaganda campaign waged by the mainstream media, half of Americans likely agree with it.

“We’ve been patient but our patience is wearing thin and your refusal has cost all of us,” President Joe Biden said on Thursday as he bypassed Congress and unilaterally ordered 100 million Americans to undergo a medical procedure against their will — or become unemployable.

“My job as president is to protect all Americans,” Mr. Biden said Thursday. “So tonight, I’m announcing that the Department of Labor is developing an emergency rule to require all employers with 100 or more employees that together employ over 80 million workers to ensure their workforces are fully vaccinated or show a negative test at least once a week.”

“The bottom line — we’re going to protect vaccinated workers from unvaccinated coworkers,” he said, completely disregarding the fact that natural immunity to the virus is exponentially more effective than the vaccine.

He also completely ignored the Constitution, the Congress, and essentially every single check and balance the government has ostensibly set up to prevent tyrants like him from making such broad and overreaching dictates.

It’s no wonder that #IwillNOTComply and #MassNonCompliance began trending immediately after the dictator on high delivered this chilling speech. In fact, they continued to trend into Friday morning highlighting the mass resistance to such tyrannical madness and the terrifying precedent that it sets.

Simply put, individuals own their bodies and have rights over them — including what they choose to eat, inject, or otherwise consume — that other individuals, groups, and governments may not violate. Biden’s mandate violates this most sacred of rights and it must be resisted en masse.

While multiple independent journalists and alternative news outlets have denounced this mandate for the fascism that it is, the mainstream media is in lockstep with the authoritarianism. ABC, CBS, NBC, WaPo, AP, MSNBC, and CNN, chose not to question the unilateral decision to force Americans to undergo a medical procedure against their will but instead to vehemently defend it.

Instead of calling out the president for his illegal and unconstitutional decree, CNN took demonizing those who actually did call him out for it.

Thanks to the way the media has been reporting on COVID-19 for the last 19 months, a pandemic and the responses, treatments, and reactions to it have been completely politicized into divisive nonsense. This has led to the viral spread of disinformation across all parties and created a rift in the country like never before.

One example is that instead of objectively looking in to the potential of ivermectin to possible treat or prevent covid, the mainstream media went on the offensive, launching a monumental campaign of misinformation, leading their viewers to believe it is solely used as a “horse dewormer.” No one here is claiming to know the efficacy of ivermectin but who is FOXSNBCNN to make these decisions for us.

Ivermectin is safer than asprin and if someone wants to talk to their doctor about taking it — whether or not it will help them — it is of no consequence to anyone else.

The concerted effort in the mainstream to wage a campaign of disinformation came to a head this week as multiple outlets ran with a verifiably false story about Ivermectin overdoses backing up hospitals. Instead of fact checking these outlets, the establishment media doubled down on it, claiming that at least one or two people may have gone to the hospital for an Ivermectin overdose, so therefore, it is plausible that ERs were overrun.

We have to ask ourselves why a media — whose job used to be to hold those in power accountable — has resorted to demonizing individuals for their personal medical choices while supporting tyrannical and unconstitutional mandates from the White House that creates a multi-billion dollar windfall for a pharmaceutical industry with a literal criminal past?

Has COVID driven everyone mad? Does the 0.009 chance that we face from dying from this disease trump all rights, liberties and logic? It sure seems like it. As Australian independent journalist Caitlin Johnstone recently pointed out in a powerful op-ed, “There’s more public criticism of ordinary people taking ivermectin than there is of planet-dominating power structures driving humanity to Armageddon.”

Given the insanely partisan nature of the pandemic, one cannot help but wonder what would have happened if Trump — who began ‘operation warp speed’ to fast track the vaccine — would have beaten Biden. It is indeed likely, that Trump would be pushing the same mandates and the GOP supporting the demonization of those who advocate medical freedom.

After all, “my body, my choice,” was a creation of the left, yet now, the only “choice” one has in regard to their own body appears to be abortion. According to the new left, there is no choice when it comes to taking a vaccine with a diminishing rate of efficacy for a disease with a 0.009 mortality rate.

It was just last year that the left was saying they were not taking any vaccines that were rushed to market “by Orange Man bad.” But once Biden became the teleprompter reader, all that changed.

In order to understand how we get out of this, we have to understand how we got into this. This is not the fault of Biden or Trump or even Obama or Bush. They are all tyrants who do what tyrants do — usurp and maintain power. We have gotten here through two decades of complacency as a bipartisan push continued to create and expand a more powerful executive and remaining silent while it happens in front of us.

As long as the tyranny benefitted “one side” the “other side” supported it. This has gone back and forth for decades now and we are finally seeing the inevitable result.

After the tragic attacks on September 11, 2001, the U.S. government declared a state of emergency. That order granted the Office of the President broad discretionary powers over the military, powers that the President normally does not have. It also gives the Executive far more power than it should have which allowed for the creation of the massive surveillance state we see today.

Since that September day, we’ve entered into multiple wars of aggression while bypassing Congress, waged a massive domestic spying campaign, eroded the Bill of Rights, and constructed a monumental police state hear at home.

Because Americans have such short memories, we are once again yielding our freedom for the perception of safety. And, just like the government has done since 9/11, they will hold on to those freedoms and refuse to give them back. This has to stop.

If we keep being so divided that we relinquish freedoms just to achieve a perceived “win” over the other team, eventually, there will be no more freedoms to give up. We are closer to that point now than ever.