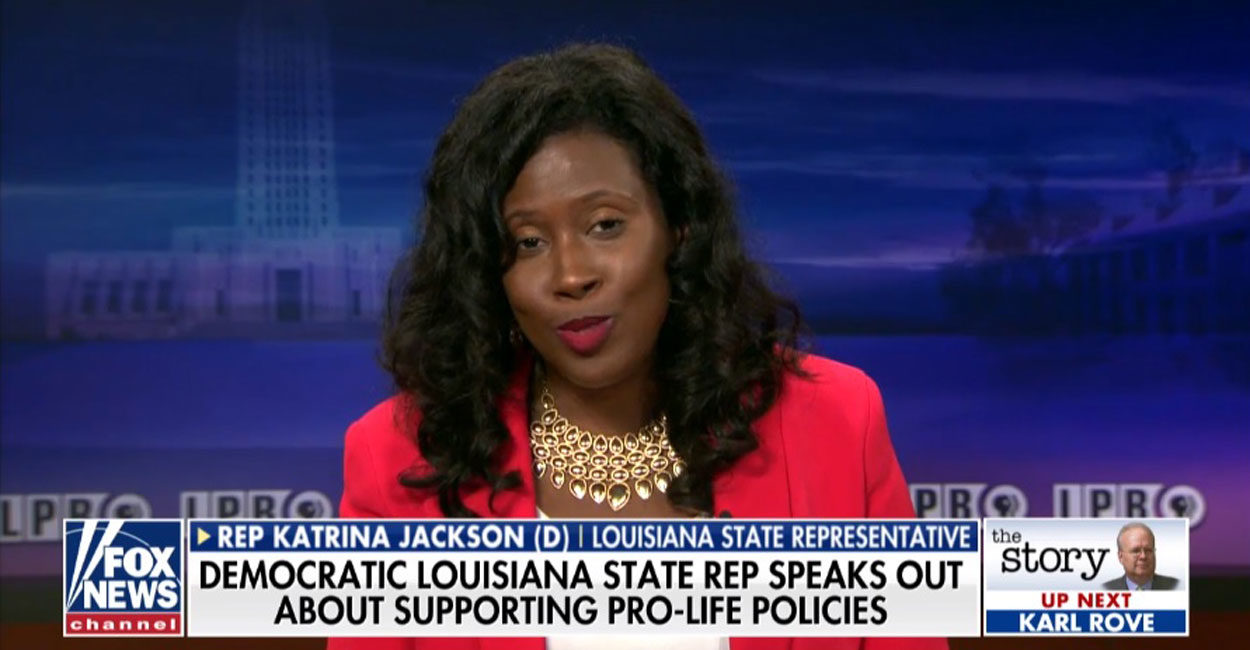 Editor: What a breath of fresh air it is to see a woman like Katrina Jackson dare stand on her own two feet AND support an opinion that is taboo within her party, at least nationally. She may have lost any chance of advancing in rank with the Democrats, but she is standing for what is right and that’s all we really want to see any of these politicians do, on either side of the aisle. Kudos Katrina Jackson. In Louisiana, Democrats still think for themselves. – Dean

Bucking her party’s fervently pro-choice stance on abortion at the national level, a Democratic state lawmaker in Louisiana is hailing that state’s enactment of legislation that would prohibit abortion after detection of a fetal heartbeat.

Appearing on “The Story with Martha MacCallum” Monday on the Fox News Channel, Louisiana state Rep. Katrina Jackson said a majority of Democrats in the state’s legislature are also pro-life.

The Louisiana House of Representatives on May 29 on a 79-23 vote passed SB184, which would restrict abortion once a fetal heartbeat has been detected. It was signed into law the next day by the state’s pro-life Democratic governor, John Bel Edwards.

Louisiana state lawmakers rejected an amendment to the bill that would have granted an exception in the case of rape or incest.

In the state Senate, which passed the measure 31-5 on May 6, amendmentswere included to require an ultrasound prior to an abortion and to stipulate that the definition of an abortion would not include the termination of a pregnancy under extreme life-threatening circumstances.

One of the country’s strictest state bans, Louisiana’s law joins a wave of restrictive abortion policies, mostly in conservative states.

Jackson boasted to MacCallum in the June 3 interview about the robust pro-life support among Louisiana Democrats.

“In Louisiana … a majority of Democrats in the Louisiana legislature are pro-life. We generally refer to ourselves as ‘whole-life Democrats,’ and so it’s not difficult for us. It’s part of our Christian values, our sincerely held belief that abortion is wrong, and so we fight for it, but we are a little different in Louisiana in how we approach this issue,” she said.

Jackson, an African American state legislator who represents the 16th District of Louisiana, has served in the state House of Representatives since 2011.

“As ‘whole-life Democrats,’ we not only ask the woman to choose life, but we author legislation that helps them take care of that life throughout the stage of life,” she told MacCallum.

While most, if not all, of the nearly two dozen 2020 Democratic presidential candidates support abortion rights, the Louisiana state representative said she wasn’t “distracted” by national Democrats.

Jackson previously spoke with The Daily Signal, prior to her speech at the 46th annual March for Life rally on Jan. 24.

“I’m not going to not only ask someone to choose life, I’m going to support legislative measures and policies that allow a child not to grow up impoverished due to the mother choosing to give birth,” she told The Daily Signal.

Louisiana is one of five states to pass bills prohibiting abortion after detecting a fetal heartbeat, joining Georgia, Kentucky, Mississippi, and Ohio. Edwards has been criticized by some fellow Democrats for signing the bill.

Karen Carter Peterson, a Louisiana state senator and the chairwoman of the Louisiana Democratic Party, called the bill signing “egregious and offensive”and apologized to Louisiana women.

“Looking at the overall scope of Roe v. Wade, I believe [that] as we see more appointments to the Supreme Court, it will be in jeopardy. I believe in 1973, when it was decided, it was the wrong decision,” she said.