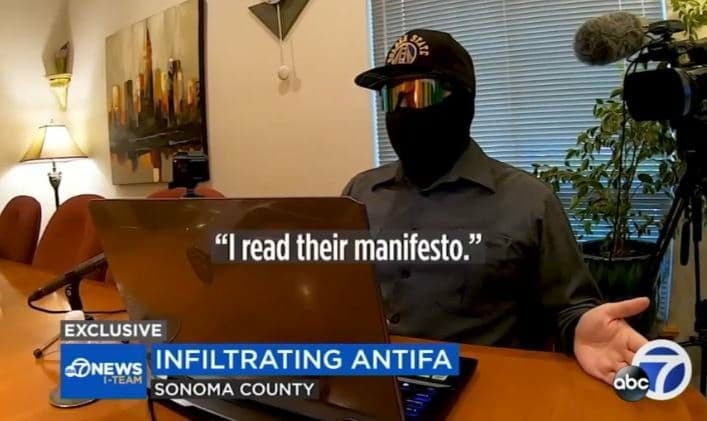 A man, who infiltrated a Northern California Antifa group, has come up and told what he discovered about them.

The exclusive report was provided by ABC7.

. Drone Captures What No One Was Supposed to See” rel=”nofollow noskim sponsored”>

The I-Team for KGO-TV, KABC’s sister station in the Bay Area, has been investigating the group’s possible connection to recent acts of vandalism, including an incident at the former home of a Derek Chauvin defense witness one week ago.

The Trump supporter tells the I-Team he infiltrated a group of activists in Sonoma County who call themselves anti-fascist, and he gave us what he says is their “target list” and recordings of their planning sessions.

Former Santa Rosa police Officer Barry Brodd testified as a use of force expert in the George Floyd trial, defending the actions of Derek Chauvin.

Brodd testified on April 13, “I felt that Derek Chauvin was justified.”

Lt. Jeneane Kucker of the Santa Rosa Police Department told the I-Team, “I know that the victims, in this case, feel threatened. And they don’t feel safe in their home.”

Brodd hasn’t lived there for more than a year. A short time later, police suspect the same group covered the hand statue in a nearby shopping plaza with blood, posting a sign “oink oink.” The I-Team is getting possible new insight into that attack and other recent acts of vandalism from a Sonoma County business owner and Trump supporter who infiltrated a group of anti-fascist activists.

Infiltrator: “So, I saw that they were here, I read their manifesto, and I could tell that they were a threat to the community, and somebody needed to do something about this.”

The manifesto posted online for SoCo (Sonoma County) Radical Action or SRA says, “Do not hesitate, do not wait … the brick in the street is meant to be thrown! The paint in the can is meant to be sprayed! The cop in your head is meant to be killed!”

The Trump supporter was able to join the group that communicates through the encrypted messaging app Wickr.

Infiltrator: “I said, ‘Comrade, you know, I, I want to smash the system the same as you,’ you know, make them not feel alone, because that’s what they really want to hear to know that there’s more people like them.”

He saved messages, documents, and recordings of their meetings.

The outlet continued the report:

TRENDING: Not Yours To Give: The Money Congress Continues To Give Away In “Relief” Bills

The I-Team has learned the group’s leader who goes by the screen name “Marb” is a 25-year-old college student, who was arrested for “felony assault on a police officer” last year at this Oakland riot after the death of George Floyd; the district attorney declined to file charges. The Trump supporter says he made this recording in March, when Marb discussed naming the group “SoCo Antifa.”

Member: “Well, more than that, they were like, we’re gonna get on the FBI watch list. Remember?”
Marb: “Yeah.”
Member: “They apparently have an eye out for that.”

Marb also talked about that same hand statue being vandalized on other occasions.

Member: “Did someone use stencils? You know-“
Marb: “Freehand!”
Member: “Oh, really? Okay.”
Marb: “Yeah. It was actually a lot easier for this situation.”
Infiltrator: “So, this is the list here.”

The infiltrator tells the I-Team he copied what the group calls its “target list,” people they want to “dox” – to publish their private information, their addresses and phone numbers, to surveil them for possible vandalism. After his testimony, they placed Brodd at the top of the list and within an hour of the attack on his former house, Marb is back on Wickr at 3:48 a.m. telling the group, “Hey y ‘all, late notice, but some comrades took action at a house owned by Barry Brodd and if someone could swing by in the morning and get pictures, our comrades would be very grateful!”

The report concluded with some eye-opening issues that have resulted from the infilration.

The infiltrator has been in touch with both the sheriff’s department and Santa Rosa police about the potential threat.

Lt. Jeneane Kucker told us, “I don’t know of any specific threats to my knowledge that have been made. But obviously, if threats are made, we’re going to take those very seriously, and we’re going to look into that.”

Marb refused my attempts to interview him, but the infiltrator intercepted one message from the group leader about “Dan Noyes at ABC7 asking about SRA. …To firmly restate our position, nobody, myself included, should cooperate with press or cops.”

The infiltrator tells the I-Team he’s been careful about protecting his identity during interactions with SoCo Radical Action that began last year.

Since we’ve been working on the story, Marb has been taking down his social media, both the public and private accounts.